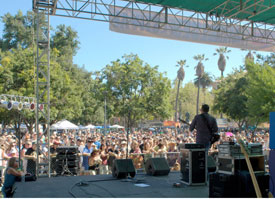 John Mayall brings his band to San Jose on July 20 to headline the 33rd annual Fountain Blues Festival. The festival will be held at St. James Park (North First and St. John St.) in downtown San Jose from noon-8 p.m.

Advance tickets are $15 and available online at www.fountainbluesfestival.com, or $20 at the gate. Kids 12 and under are free with an adult. Special VIP ticket-holders upgrading to a $50 package are entitled to seating in a shaded tent near the side of the stage, special restroom facilities, a festival T-shirt, chair massage services and their first beverage. 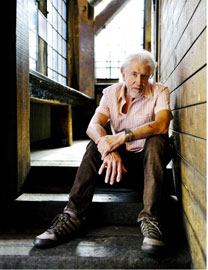 Mayall, the legendary English bluesman who has played the elite musicians of the last five decades, now fronts a band including more great players: Rocky Athas on guitar, Greg Rzab on bass and Jay Davenport on drums. Thin Lizzy immortalized Athas with the song “Cocky Rocky” after watching him play one night. Davenport brings Chicago-style blues to the rhythm section, having paid his dues for decadeswith greats such as Junior Wells, Valerie Wellington, and Jimmie Johnson. Rzab is also a Chicago area native, earning accolades in both the blues and rock circles playing with Albert Collins, Willie Dixon and John Lee Hooker.

Scheduled to join Mayall at the Fountain Blues Festival is Ruthie Foster, 2012 Grammy nominee for Best Blues Album (“Let it Burn”) and Blues Music Awards’ 2010 and 2011 traditional blues female artist of the year, who will make her encore performance after receiving standing ovations for her Fountain Blues Festival debut in 2012. She mixes gospel, jazz, folk and soul into her music and her voice has been compared to Aretha Franklin and Ella Fitzgerald.

Roy Rogers and the Delta Rhythm Kings makes their seventh appearance at the festival. Rogers is considered one of the world's premier slide guitarists and eight-time Grammy Award nominee as performer or producer.