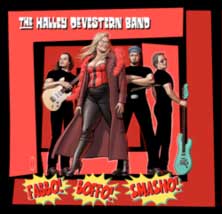 Being compared to Janis Joplin is a heavy burden. However, blonde bombshell Halley DeVestern explodes out of her songs with unbridled passion, power and social principles requiring no comparison for credibility, including performing with Big Brother & the Holding Company. Following Sugar Free (2007), DeVestern has kicked out the jams with three releases to stimulate the mind and body. Her most recent is the aptly titled Fabbo! Boffo! Smasho!, an exhilarating combination of booty-shaking funk, blues, R&B and rock; a punch in the ear and a kick in the pants.

The song “Muscle Memory,” which was also the title of her previous release, is a healing dose of funk as DeVestern reams a former lover with “Remember when I loved you and how we kissed, then I think of how you hurt me and my hands are fists” while the band cranks a greasy beat.

The minor key funk rock of “Kangaroo Mama” employs the unique image of a kangaroo’s pouch as a metaphor for safe haven in which to hide for security, DeVestern rapping and testifying with searing heat.

On the classic R&B ballad “Money Ain’t Time” she chastises those who worship the mighty buck, the organ of Ed Kalehoff swirling ominously and Patterson spinning menacing electric lines as her voice rises and falls dynamically from a purr to a nasty growl:  “…you know its forever, the time you’ll be dead, and it’s a long way to heaven with all that bread. They say time is money, but honey, money ain’t time.”

On the chunky, blues-thumping “Tore Up from the Floor Up,” DeVestern humorously and graphically bemoans life on the road (specifically, its temptations and their unpleasant after effects):  “…Baby’s got the rabies, whole crew’s got ‘em, too. I think I got Ebola or just the Johnnie Walker flu”.  DeVestern’s voice modulates from a defiant belt to spoken words that sound convincingly like she is suffering from the mother of all hangovers.

DeVestern lets loose her outrage at insidious racism in “Boil,” a melancholy, minor key rocker, in which she builds from a whisper to a full-throated howl of righteous indignation, her anger directed at the Right with “Ol Billy Bob is a fire starter” and “When they raise the plastic chalice and offer that KoolAid, son, daughter don’t drink red water.”

A timely tale about hard times unravels in the gospel hued ballad “American Pain”.  Here, DeVestern employs the fast money promise of Las Vegas as a symbol of the desperation felt by many Americans, while pointing a finger at the big money men.

On a crusading roll, DeVestern rails against “big brother” in “Code 9,” named for the Textspeak practice of typing a “9” to indicate a change of topic if an authority figure enters the room. Horns blare, Mark Mancini adds a touch of classy electric piano and Patterson tears off a soaring solo in the dramatic, minor key, R&B strut that evolves into urgent double time before fading into a haunting coda.

Halley DeVestern burns hot with the fire of musical creativity that has to come out. The listener is the fortunate beneficiary of her burgeoning talents and unstoppable drive to entertain and enlighten.