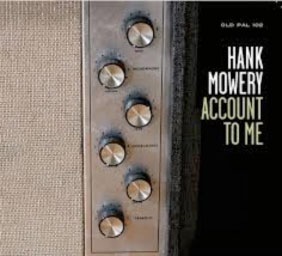 “We don’t consider this a ‘tribute’ CD, but more of a collaboration with the Primich family,” says Hank Mowery about the new album, which also features Gary’s former bassist Patrick Recob, and detailed liner notes about the songs as well as Primich’s importance to blues by Severn Records singer/harmonica player Tad Robinson, a long-time friend.

Account to Me showcases five Primich compositions: “Put the Hammer Down,” “My Home” and “Pray for a Cloudy Day,” plus two unearthed never-before-recorded songs, “Tricky Game” and the title track; two Hank Mowery originals; a new song from Patrick Recob; and covers of Memphis Slim’s “Banana Oil” and Rev. Robert Wilkins’ “That’s No Way to Get Along.” All of the tracks fit together seamlessly and one could imagine very easily Gary Primich, himself, recording an album such as this.

“‘Account to Me” is just a classic Gary tune,” says Mowery about the newly-discovered song. “He was such a great story teller and this really paints a picture that is hard to listen to at times, knowing his history.  On the vocal track we kept, I almost had to stop multiple times and could barely get through it.  I just kept thinking about him writing this and his family hearing it for the first time…it still gives me a lump in my throat.  After the song ended, it wasn’t perfect but I knew I would never get as close to that song as I was in that moment, so we kept it.

Mowery calls the other new song, “Tricky Game,” “another classic Gary tune, with a lot of meaning and a touch of humor.  We were all in the studio looking at Gary’s lyrics trying to figure out what direction to take on the song and what Gary was thinking on a couple of the parts. We were having a lot more trouble on this than with ‘Account to Me.’ Our piano player, Chris Corey, quietly stood up, walked over to the piano and played a lick….we all stopped and said ‘that’s it!’ At that point everyone stood up and started working on their parts; it was a great moment and maybe one of the most creative moments I have ever been a part of,” he recalls.

The Hank Mowery originals include the album’s opener, “Spend a Little Time,” a rocking barroom blueser that kicks off the CD in grand style; and “If I Knew What I Know,” which asks the universal question we all ask when tragedy happens to a friend. “I had the idea for the song right after Gary passed in 2007 but never finished it,” Mowery remembers. Maybe a little too honest for me at the time, but when we started this project I knew it was time to finish it.”

The catalyst for recording Account to Me had its beginnings in 2012 when Mowery did a tribute show in Grand Rapids for Gary on the fifth anniversary of his death. Mowery and Primich had first met in 1995 when Hank was running a blues club in Grand Rapids and the two hit it off really well, with Mowery booking Gary anytime he came through town. After he left the club, Mowery stayed in touch with Primich and when he knew Gary was struggling with some issues, flew the bluesman into Grand Rapids to do a couple so shows to help his friend. Another trip was planned for the following year but never happened because of Gary’s death.

“That 2012 tribute show in Grand Rapids included Doug Deming, Dennis Gruenling, their band, Peter Madcat Ruth and my band,” says Mowery. “When Gary’s family heard about it they got very involved and Gary’s dad, JV, came up for the show…it was really great…he addressed the crowd and had every single person laughing and crying at the same time.
“About a month after the show I got a call from Gary’s sister, Darsha, asking if I would record these two songs they had found lyrics to after Gary passed. I told her that there were many other players (more famous than I) that would jump on this chance and that maybe she should rethink the offer. She said that they trusted me to do what needed to be done and respect Gary. I was very honored and humbled to be asked to do it. After we started the project, Darsha wanted us to do a few covers as well, so we said no problem. I then asked Darsha if she wouldn’t mind if I did a few originals and made a full CD out of it. That is when she made the offer to release it on Old Pal Records.

“I asked Primich bassist Patrick Recob to come in for the project and he accepted. I asked Tad Robinson to do the liner notes because he was a long-time friend of Gary’s. I contacted Kate Moss to design the CD because she and her husband Nick had become somewhat close with Gary and actually had recorded with him not long before he passed away. I found an all-analog studio in Grand Rapids where we could record it like Gary would’ve wanted it. And I only included players that either knew Gary or understood the weight of the project and could respect its significance. I wanted to surround the sessions with people that were up for trying new things to create unique textures throughout the CD, would give honest feedback, leave egos at the door, not worry about how many of their licks were used on the CD and generally get into and enjoy the spirit of what we were doing.”

Account to Me is available for sale through CD Baby and iTunes, with additional sales info available at www.hankmowery.com.