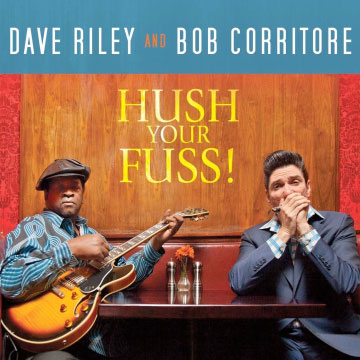 The “Mississippi meets Chicago” blues partnership of Dave Riley and Bob Corritore is now in its eighth year. Hush Your Fuss!, their third CD together, features original songs and rootsy, old-school storytelling blues that puts you in rural Mississippi by way of Chicago, all in the well-honed style of two who have toured extensively together in the USA, Europe and South America. Their stage show is a real down-home blues throw-down!

Dave Riley grew up in Hattiesburg, Mississippi before moving to the West Side of Chicago. He worked down South in later years and was a close associate of Frank Frost, Sam Carr and John Weston.

Bob Corritore is a Chicago born and bred harmonica player. He won the 2012 Living Blues Award for Best Harmonica Player. Bob’s Harmonica Blues CD won a 2011 Blues Music Award, he is a recipient of  the Blues Foundation’s Keeping The Blues Alive Award and performed on a Grammy-nominated album.

“Together they have a crafted sound completely unique to these experienced blues players. [Hush Your Fuss!] upholds and advances their tour-tested formula. … It’s not a history lesson or same old stories. It is modern day, down-home, juke joint blues performed by two creative masters.” Bob Margolin

VizzTone Records is proud to present Hush Your Fuss! in partnership with the Southwest Musical Arts Foundation.