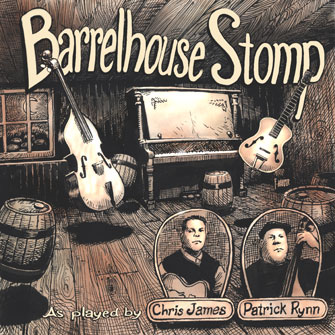 Barrelhouse Stomp, Chris James and Patrick Rynn’s third album for the Earwig label, is firmly rooted in traditional Chicago Blues, yet the San Diego-based duo continues to evolve and take chances in the studio, as this collection attests in eloquent fashion. This is tough, real-deal electric Blues to party to... dance to.. sit down and savor.
You’ll never find a blues guitarist who appreciates the integral role of piano in the idiom more than Chris; every hard-hitting selection on Barrelhouse Stomp boasts rock-solid ivories accompaniment. Chris and Patrick recruited three of the finest blues pianists on the planet—Henry Gray, Aaron Moore, and David Maxwell—to take part in this project, along with a pair of Chicago legends, guitarist Jody Williams and saxist Eddie Shaw. That’s some heavy guest talent, and each of those blues greats makes their mighty presence strongly felt on the set.

Patrick’s driving bass (he’s been nominated for four consecutive BMAs on his chosen instrument) provides rock-solid underpinning for Chris’ earthy vocals and sizzling axe as they deliver another batch of splendid originals. Barrelhouse Stomp features two firsts: Patrick takes a surging bass solo midway through “Just Another Kick In the Teeth,” while Chris steps out on harmonica on “It Always Could Be Worse.” Great originals are joined by well-chosen Robert Nighthawk, Little Brother Montgomery, Junior Parker, Big Bill Broonzy, and Elmore James songs.

Even though their high-energy attack reflects their love for postwar electric blues, Chris James and Patrick Rynn are decidedly of this moment— and Barrelhouse Stomp lives up to its title and then some.