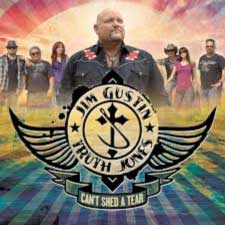 Can't Shed A Tear is the debut CD from Jim Gustin & Truth Jones and was produced by blues veteran Terry Wilson (Teresa James, Eric Burden, Paul Kossoff, Ana Popovic). Gustin, a singer, songwriter, guitarist from Southern California, has a distinctive, powerful voice, soulful and blue with a smoky rasp. He is also a very solid guitarist with great tone and a funky groove. In addition to the talented and versatile Truth Jones band, the CD includes special guest appearances from the incredible Teresa James and John Rabbit Bundrick (Free, Roger Waters, The Who).

Jim has been playing in and around the L.A. area for over 30 years. His first gig on guitar was at the LA Sports Arena in front of 10,000 people. He has performed at Dodger Stadium and Staples Center. He has played at the Antelope Valley and LA County fairs. He performs regularly at his church and at benefits for Help the Children, Susan G Komen Foundation and our military veterans.

"I Gotta Sing" has an up- tempo groove, with a great bass line and Teresa James on backing vocals. "Can’t Shed a Tear" shows off both Jim Gustin's soulful voice and blue guitar on the bouncy title track. On "No Faith in Forever" Jim trades lead vocals with the sultry Jeri Goldenhar and Jim Scimonetti’s saxophone sets the mood for this sexy blues tune. "If God Made Something Better" is a head-bobbing blues groove written for and about Mrs. Gustin. Great production by Terry Wilson. "Beauty for Ashes" has a dobro guitar intro that sets the stage for Gustin’s incredibly honest, sometimes angry battle to heal from the heartbreaking loss of his son on Christmas Eve. Great guitar solo by Chris Baurer. "Why, Why, Why?" has Jim giving a convincing vocal performance on this Stones sounding mid tempo ballad, features Chuck Goldenhar on harmonica. “Good-Bye” features Jeri Goldehar sassing up this greasy Texas shuffle. "My Baby Just Left Me Again" features Jim Scimonetti’s clarinet and horns over Teresa James’ piano taking you to New Orleans for this playful little song. "Fill Up My Soul" has funky guitar, a bumping drum beat, and a great piano solo by Ed Winquest setting the stage for Jeri Goldenhar's vocal on this soulful R&B tune. On "You Never Gave Up on Me," Jim sings one with a country flavor, written for his Mom on Mother’s day. This one is easily his most requested song. "You Answer Me" features wah-wah guitar and a Tom Petty type mid tempo verse leads to a catchy chorus anthem. On "Life is Hard, Live With it" Jim gives this Teresa James classic the Allman Brothers, ZZ Top treatment. "What Do You See in Me" sounds like an Etta James meets Kathie Mattea Ballad. "Say Amen" is a great gospel blues tune with a cartwheel inducing ending.