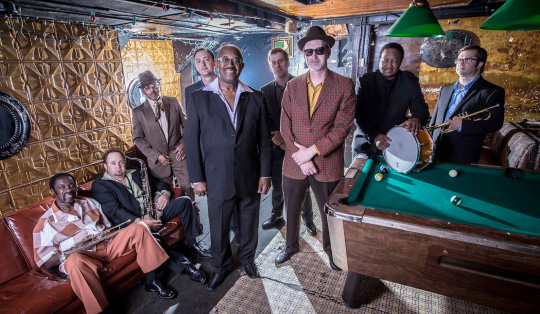 Memphis soul men, The Bo-Keys, just released two vinyl/digital-only 45s this week on Electraphonic Recordings. A mini-documentary chronicles the recording of these sides, featuring band members Howard Grimes (Al Green), Archie "Hubbie" Turner (Al Green), and guest vocalist Percy Wiggins (ATCO Records). This is deep soul from a mix of the folks who recorded with Hi and Stax in the 1960s and a new crop of devotees.

The band joins with legendary vocalists Spencer Wiggings and Percy Wiggins for a deep soul rendition of the Dan Penn and Chips Moman classic hit "At The Dark End of the Street." Versions by Cat Power, Springsteen, Elvis Costello, Ryan Adams, and in the film "The Commitments" have kept it in the public eye and Penn and Moman are most recently celebrated in the new documentary "Muscle Shoals." B-side "Wind Up Monkey" sounds like a lost, funky instrumental cut from Stax or Duke/Peacock, which debuted this week at Wax Poetics.

The Bo-Keys also teamed up with soul powerhouse Percy Wiggins to bring you their other new single steeped in the Bluff City heat, the original "I Need More Than One Lifetime." The B-side is a funky instrumental take on Ennio Morricone’s cult Western film theme "The Good, The Bad & The Ugly."