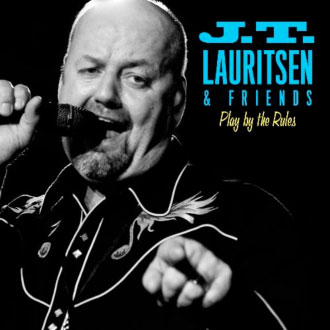 Memphis is writ large throughout J.T. Lauritsen’s seventh album, Play By The Rules. Lauritsen (vocals, harp, accordion and Hammond B3) and regular drummer Jon Grimsby hired Memphis’ legendary Ardent Recording Studios which has produced recordings from the likes of Robert Cray, B.B. King, ZZ Top and Albert Collins over the years. Alongside luminaries that include Billy Gibson, Anson Funderburgh, Willie J. Campbell and Victor Wainwright, they laid down five tracks. The other seven tracks were recorded back home in Norway with Lauritsen’s regular band, The Buckshot Hunters, to round off the album. It was all then sent back to Ardent’s Adam Hill for final mixing and production. The end result is sure to receive the same plaudits as its illustrious predecessors.

Scandinavia’s association with the blues stretches back over half a century. J.T. Lauritsen has been part of that association for over 20 years. During that time he has been developing and refining The Buckshot Hunters’ own unique sound, forging together elements of soul, zydeco, blues and rock and roll.

On Play By The Rules, Lauritsen’s “friends” (whether they be Memphis musicians or The Buckshot Hunters), all play their part in creating the album’s polished sound. They were all so at ease working with one another that it took just two days to record the whole album!

Being blessed with a great, soulful voice, Lauritsen can carry off songs Stax stalwart William Bell’s “Everyday Will Be Like A Holiday,” while sounding totally authentic. The are five other covers ranging from Big Walter’s “Need My Babe” where Billy Gibson duets with Lauritsen on the harp, through to the somewhat unexpected, but very welcomed Gospel-like rendition of Gillian Welch’s “Valley Of Tears.” The quality of the six originals is such that it would be hard to tell them apart from the covers.

Acclaimed blues writer Robert Gordon of Ardent Studios said, ”You come record here, something good happens to you.” One listen to Play By The Rules is all it will take to convince you that he is right.