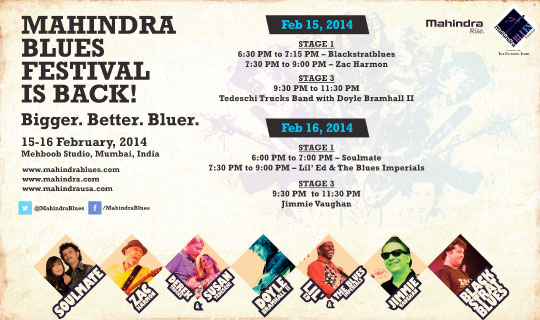 Known as Asia's largest and finest Blues phenomenon, the Mahindra Blues Festival brings together some of the best Blues musicians in the world for 2 days of guitar-rippin', soul-trippin' music at the iconic Mehboob Studio in Mumbai.

Since its inception in 2011, the Mahindra Blues Festival has been instrumental in bringing down international Blues legends like Buddy Guy, John Lee Hooker Jr., Taj Mahal, and Walter Trout, among others, to Mumbai - fuelling a burgeoning interest in Blues music in the country. MBF has also become a great platform for Indian Blues bands to perform along with the best Blues musicians in the world. This year, MBF was nominated for a Keeping the Blues Alive award presented by The Blues Foundation.

Tedeschi Trucks Band: With his signature slide-guitar sound and her honey-to-husky voice, Derek and Susan Tedeschi lead a 10 member ensemble that plays a hearty roots-rich blend of blues, soul, jazz and rock. On stage, they are a joyful explosion of music and energy!
Zac Harmon: From crooning soulful songs to bringing down the house with sassy upbeat lyrics paired with a whimsical guitar styling, Zac’s Delta Blues inspired music promises to be one hell of a Blues ride!
Soulmate: This iconic duo from Shillong is set to make history yet again, and re-define the sound of Indian Blues by fusing Khasi folk elements with their own music rooted in Blues-Rock, Soul and R&B.
Jimmie Vaughan: Jimmie Vaughan's clean, uncluttered style utilises raw emotion, simplicity, and an elegance that is powerful and accessible, earning him the respect of greats like B.B. King and Eric Clapton.
Doyle Bramhall II: Doyle's impressive guitar skills, songwriting prowess and soulful vocals have led to critically acclaimed Blues rock albums, as well many fruitful collaborations with musical giants including Roger Waters and Eric Clapton.
Lil’ Ed & The Blues Imperials:  Lil' Ed & The Blues Imperials are a high-octane ensemble who have been playing the Blues for 24 years. They are known for their foot-stompin' numbers that are full of fire and smoking slide guitar boogies that promise an exhilarating Blues experience.
Blackstratblues: A Blues-rock ensemble led by guitarist, songwriter and producer Warren Mendonsa, Blackstratblues is known for their distinctive sound that creates a musical experience - alternately touching, uplifting and energising.