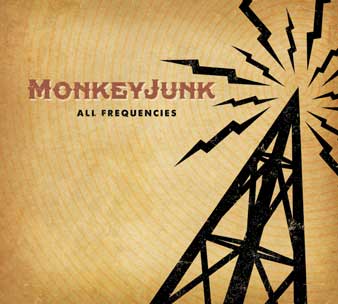 “Sonically speaking, there are some new and exciting flavors on this album,” says Steve Marriner about the sessions that produced All Frequencies. “This is an analog recording using a Neve console, cut to two-inch tape and mastered to half-inch tape. These tools helped achieve certain sonic qualities that until now were untapped for us. As well, since the last recording, I’ve had a custom baritone guitar made which allows me to produce much more bottom end. With the absence of a bassist in our group, representing those low frequencies is always a challenge, but on All Frequencies the bottom end is indeed robust. We did a lot of experimenting with guitar sounds this time, too. On several tracks, I’m running my guitar through a Leslie cabinet to achieve that classic choral effect Buddy Guy and the Vaughan Brothers have all employed over the years.  Tony kicks on a wah-wah pedal more than in past recordings and plays more slide guitar than ever.  Also, I believe we captured the finest drum sounds of any of our records. We had access to many beautifully-sounding vintage microphones, which helped make the drum sounds tighter, yet fuller and have more overall impact.”

All Frequencies is the follow-up to the band’s 2011 label debut, To Behold, which won the 2012 Juno Award (Canada’s Grammy) as “Blues Album of the Year.” Over the last five years, MonkeyJunk has also garnered 15 Maple Blues Awards, including “Electric Act of the Year” four years running.

“The most immediate and noticeable difference about All Frequencies compared to our previous CDs is the originality of the content,” states Marriner. “Whereas the previous albums had a distinctly more traditional blues influence,All Frequencies allows all sorts of influences through the door.  It’s really a mixed bag of songs and sounds: greasy rock ‘n ‘roll, swampy blues, uptown funk and soul, and even a little taste of Appalachia.  Of the ten songs, we wrote nine and covered a Bobby Charles tune. As with previous songs we’ve covered, we tried to make it more of an ‘interpretation’ than a faithful cover. We really tried to put our own stamp on it.”

With the release of All Frequencies, MonkeyJunk raises the bar even further than its last multi-award winning album, with an exciting and genre-pushing sound firmly planted in its blues/roots foundation, but driven to new heights with a creative display of energizing musicianship that should bring it even more accolades come next awards time.
“While there are some outstanding solos on this album (particularly by Tony D), the majority of the solos are tight and melodic,” declares Marriner. “The focus was more on the lyrical content and the choruses. We tried to write relevant songs that people can relate to and sing along with, supported by grooves that will make them move. All Frequencies is noticeably more up-tempo than To Behold. Where To Behold included three ballads, All Frequencies has one, and even then, it’s a real burner.”

“Since our inception as band, MonkeyJunk has always tried to do things a little differently,” offers Marriner. “We’ve always had a wide range of influences in our repertoire.  At some point in the last couple years, we stopped worrying whether it was ‘bluesy enough’ or not.  We’ve realized that people who know our music, have seen us play and are fans of our band are likely going to dig what we’re doing. There is a noticeable progression between our first and second albums and I think All Frequencies represents that same sort of evolution.  We’re growing and we’re exploring. Every era of blues music has influential artists who changed the soundscape of the music and throughout their careers, explored different musical possibilities.”
MonkeyJunk will tour extensively in support of All Frequencies.