The Orange County Blues Society's Benefit to "Raise the Roof” is set for February 23rd in Anaheim, California 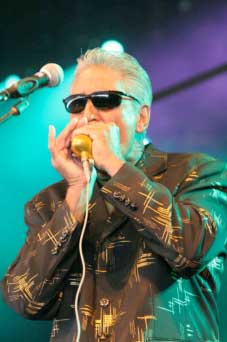 The benefit to Raise the Roof is a once in a lifetime Blues concert presented by the Orange County Blues Society at House of Blues Anaheim on February 23rd, 2014, from 3-7 PM. This event, in conjunction with The Blues Foundation, is part of a Nationwide campaign to raise funds to build a Blues Music Hall of Fame in Memphis, TN.

Headlining the show is the Laurie Morvan Band. After winning the Blues Foundation Award for Best Self-Produced CD at the 2010 International Blues Challenge, the Laurie Morvan Band lit up the stage in their very own half-hour TV special, which continues to air Nationwide on the Big Ten Network. The band's successful coast to coast touring includes performances at festivals, city events, clubs throughout the USA and Canada, the Legendary Rhythm & Blues Cruise and later in 2012 their first European tour. The Laurie Morvan Band plays red hot blues that feeds your soul.

Also on the bill is The Double Down Blues Band featuring Jeff "Papa J" Hudson on vocals and harmonica (who is, coincidentally, the President of the Orange County Blues Society), Dan Malouin, bass, Mike Dotson on guitars and bass and Ray Moreno on drums and percussion. They will be bringing their brand of West Coast Chicago blues.

Special guests performing with The Double Down Blues band will be Eric Sardinas, the American blues-rock slide guitarist from Fort Lauderdale, Florida, noted for his use of the electric resonator guitar and his live performances and sometimes setting his guitar alight on stage during shows and also, Rod Piazza, the American blues harmonica player and singer. Don't make the mistake of thinking of Rod Piazza as one of the "young turks" of the blues, or part of the "new generation" of blues greats, Piazza is a tried-and-true, dyed-in-the-wool blues veteran with credentials that are second to none.

Also performing will be The Chase Walker Band. "When you hear California based Chase Walker Band for the first time you know for sure that the next generation of the blues has come calling!;" Crosscut Delux, who "play the blues and nothing but the blues, straight up;" Rhythm B. Goode, a “Blues/Rock, R&B, Soul, Funk, Mex-Tex cover and original band with a drive and passion to entertain everyone;” and rounding out the bill are Hunter and the Dirty Jacks, a high energy, multi dimensional, rootsy-rock and blues band from Los Angeles.

And all of this for only $12.50. Tickets are available online and for only $10.00 on the Orange County Blues Society website.

The new Blues Music Hall of Fame will be a tribute to the blues men and women who have kept the blues alive; the place for serious blues fans, casual visitors, and wide-eyed students. It will facilitate audience development and membership growth. It will expose, enlighten, educate and entertain.

Get your groove on and be part of history at this once in a lifetime show featuring this uniquely American musical tradition, with all proceeds going to support the Blues Foundation's capital campaign to establish a Blues Hall of Fame Museum.