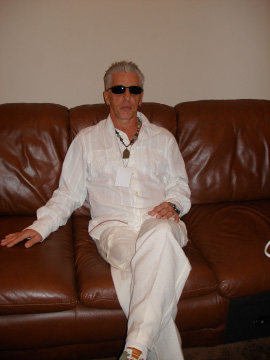 Each year, The Blues Foundation presents the Keeping the Blues Alive (KBA) Awards to individuals and organizations that have made significant contributions to the Blues world.

This year the 2014 KBA for Publicist was awarded to Frank Roszak Promotions of North Hills, California. “How sweet it is to be affiliated with an organization like the Blues Foundation along with all the previous and current recipients of the KBA,” said Roszak. “I have never been so honored and humbled”.

Though he has over 25 years of producing and engineering experience, Frank Roszak began his promotional work in 2004 as director of marketing and promotions for Delta Groove Records, where he was directly responsible for coordinating all aspects of Delta Groove and Eclecto Groove artists’ relations with media and radio outlets. In 2011 he founded Frank Roszak Promotions, dedicated to supporting deserving artists in both recordings and touring. His tireless work has garnered his clients’ publicity in all the major blues publications here and abroad – Guitar Player, Goldmine, DownBeat – as well as in USA Today, the New York Times, and many, many others. In addition, Roszak has secured top radio positioning for his clients with Sirius XM, Little Steven’s Underground Garage, Living Blues Charts, House of Blues Radio, Music Choice and Galaxie. The clients he has served since 2011 number more than 60 and include Big Bill Morganfield, Sugar Blue, Hans Theessink, J.P. Soars, Victor Wainwright, and many others.

Unlike the Blues Music Awards, the award recognizing the past year's best in recordings and performance voted on by thousands of The Blues Foundation's members, the KBAs are awarded to non-performers strictly on the basis of merit by a select panel of Blues professionals. Noted educator, author, journalist, and KBA Chairman Art Tipaldi notes "The KBA may be awarded for the recipient's work in the past year but most often reflects a lifetime of work.

The Blues Foundation will honor 20 individuals and organizations with its 2014 Keeping the Blues Alive Awards during a recognition luncheon Friday, January 24, 2014, in Memphis, Tennessee.