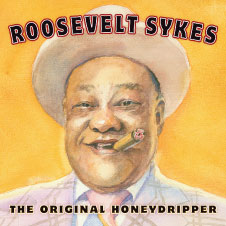 Considered by many to be the father of modern blues piano, Roosevelt Sykes enjoyed a career that spanned some sixty years. In 1929, at age 23, he was one of the earliest blues pianists to record. In the following decades he went on to became a very prolific recording artist, a highly successful bandleader and later, a popular solo artist. He was a pioneering pianist responsible for the classic songs "44 Blues," "Driving Wheel," and "Night Time Is the Right Time."

The Original Honeydripper was recorded live in 1977 in the small basement blues club of the Blind Pig Café in Ann Arbor, Michigan. It was recordings and performances such as this that led to the formation of Blind Pig Records. Originally released on LP, this re-issue, with improved sound quality, also contains two original outtakes, "St. James Infirmary" and "Don't Talk Me to Death," that have been marvelously resurrected.

The selections on The Original Honeydripper span the length and breadth of Roosevelt Sykes' career and the times in which he lived.  Featuring Roosevelt's own musical hybrid of ragtime and country blues piano, these solo performances capture Sykes as the consummate entertainer who truly delighted in singing and playing piano for lively, appreciative audiences.  As All Music Guide said, "This label can really be counted on to do a fine job on documenting an artist. For a recording of this artist in his later years, one can't really do better than this set.