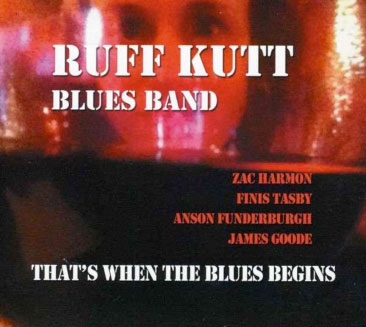 Texan James Goode describes himself as an “old rascal and beat-up coach,” but this Rockabilly Hall-Of-Fame inductee, songwriter, bass player, and creator of the Ruff Kutt Blues Band certainly knows how to field one hell of a Blues team. That’s When The Blues Begins features fourteen songs written or co-written by Goode, performed by world class Bluesmen including vocalist/guitarist Zac Harmon, vocalist Finis Tasby, and producer/guitarist Anson Funderburgh.

The first Ruff Kutt Blues Band album, Mill Block Blues (2011), garnered critical raves and was so successful that Goode was able to donate $10,000 of proceeds to the Blues Foundation’s HART Fund, providing relief to Blues musicians in need. When he decided to do a follow up, it went without saying that the first call would go out to Texas Blues guitar hero Anson Funderburgh, who anchored the first CD. Anson was quick to sign on to produce the new CD and soon they brought in internationally acclaimed Blues heavyweights Zac Harmon and Finis Tasby to form the nucleus of the team for That’s When The Blues Begins. Rounding things out are Wes Starr on drums, Ron Jones on saxophone, and keyboardist/engineer Gentleman John Street.

This all-star aggregation hits a deep blues groove and delivers Goode’s songs with the assured, relaxed intensity of seasoned pros. Sadly, these sessions are the last recordings Finis Tasby completed before suffering a debilitating stroke in December, 2012.  His many friends and fans have been sending prayers, support, and their hopes for his recovery.  To help things along, $1 from every Ruff Kutt Blues Band CD sold from the VizzTone store will be donated to the Finis Tasby Medical Fund.