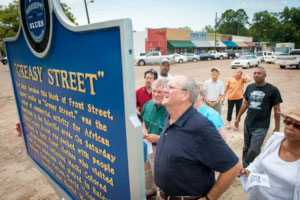 A crowd admires the new Mississippi Blues Trails Marker unveiled on Greasy Street in Ruleville on Tuesday. Many influential bluesman in the Delta performed along the once popular street.

The notable marker was unveiled at the corner of Floyce and Front Streets, the area close to what is commonly referred to as Greasy Street.

Front Street was the first commercially developed zone in Ruleville, with its name stemming from its location fronting the railway line.

The block was supposedly nicknamed “Greasy Street” because years ago café owners would throw old grease on the street to keep down the dust.

Musicians would play on Saturday afternoons when the street was crowded with residents of nearby plantations who came to town to shop and relax.

"It's important to honor the people, places and things that contributed to blues in the Mississippi Delta — the birthplace of American music," said Allison Washington, Mississippi Development Authority Music Trails program manager.

"Ruleville lies in the heart of the Delta and a lot of blues musicians performed up and down this street. We want to make sure everyone recognizes the historical significance here."

"This district of Greasy Street was a very significant blues area," said White. "The stories of music that was played here and the musicians who passed through are very important to the community."

The city's plan was laid out in 1898, the year after the Yazoo Delta Railway (later part of the Illinois Central-owned Yazoo and Mississippi Delta line) extended its tracks northward from Moorhead.

It connected there with the east-west running Southern Railway in Mississippi — an intersection famous in blues lore as “where the Southern cross the Dog.”

With the arrival of the train, Ruleville’s population grew dramatically from 226 residents in 1900 to 1,022 in 1920, as did the population of plantations in the area.

Located a block south of the railway depot and across the tracks from several cotton gins, Greasy Street soon became an important destination for blues performers.

In the 1930s, Shaw native David “Honeyboy” Edwards recalls seeing Charley Patton, the most influential bluesman in the Delta, who lived at the Dockery Plantation four miles to the west.

Edwards always played on Greasy Street together with Howlin’ Wolf, aka Chester Arthur Burnett, who lived at the Young and Morrow Plantation between Ruleville and Doddsville.

The main musical establishment on Greasy Street for many years was Mack’s Colored Cafe, operated by McKinley Harvey. During the segregation era, the Annex Theatre also catered to African Americans.

The block also housed two grocery stores run by people of Chinese descent, which were found throughout the Delta: Jim Kee opened his store in 1918, and from 1965 to 2011, it was run by Kan and May Jee as Kan’s Food Market.

James Jee operated the adjacent Jee and Company store between 1940 and 1989.

Among the many clubs that operated on Greasy Street over the years, Club Black Castle, which also housed Mr. Fugee’s Bar and Grill, hosted the most prominent performers.

In addition to Ruleville native Jimmy Rogers, who has his own Blues Trail marker in town, musicians who were born or lived in Ruleville included Charley Patton associate Ben Maree, one of many artists that folklorist David Evans identified as playing in a local blues style he called the “Drew tradition.”

Tuesday's unveiling marks the 171 sign on the Mississippi Blues Trail, a program of the MDA's Tourism Division.

It is seen as a museum without walls taking visitors on a musical history journey through Mississippi and beyond.

The trail started with the first official marker in Holly Ridge, the resting place of blues guitarist Charley Patton, and winds its way to sites honoring B.B. King, Muddy Waters, Son House and others.