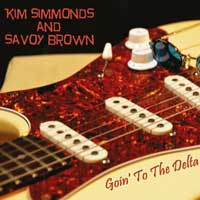 Pack a bag. Buckle up. Hit the gas. Goin’ To The Delta invites you to ride shotgun with Kim Simmonds on a musical road trip through his spiritual homeland. “When I started the band back in 1965,” says Savoy Brown’s iconic frontman and guitarist, “The concept was to be a British version of a Chicago blues band. Now, here we are in 2014, and once again, the music on this recording echoes the blues sounds of Chicago.”

Released February 11, 2014 on Ruf Records, Goin’ To The Delta is the sound of a band with the wind in their sails. Following 2011’s acclaimed Voodoo Moon and last year’s whip-cracking live set, Songs From The Road, Savoy Brown are in a swagger and you can hear the momentum on these 12 love letters to American blues. Rather than reinvent the wheel, Kim applies his own unmistakable thumbprint to the classic blues shapes, from upbeat Windy City bouncers like “Laura Lee” and “Nuthin’ Like The Blues” to the weeping ballad, “Just A Dream,” and the stinging instrumental, “Cobra.”

“The band’s style has evolved in many directions, whilst always keeping the blues as its root,” says Kim of the Savoy Brown back catalogue. “Now we’ve come full circle. The songs and playing on this album are straightforward in focus and as basic as blues should be.”

Maybe so, but when it comes to the lyrics, Goin’ To The Delta gets complicated. Kim has always been a great chronicler of human relationships, and the women come and go on this album, too, from the ex-lover who changes the locks on the raunchy “Sleeping Rough”- to the mistress who lets him sneak out the back-door on “Turn Your Lamp On.” Along the way, there’s sorrow on “Sad News” (“I’m like a star without a sky”) and redemption, too, in the closing “Going Back” (“I’m going back to my baby, been away too long…”).
Like the women, plenty of musicians have flowed through the Savoy Brown lineup over the years, but after the stellar contribution of Pat DeSalvo (bass) and Garnet Grimm (drums) to Songs From The Road, it was a no-brainer to assemble that same rhythm section at Subcat Studios, Syracuse, New York. “The band on this album gets to show what great blues musicians they are,” says Kim, “Playing tunes right in their wheelhouse. Through the changing years, my guitar playing has stayed the same, though many say I’m playing guitar better than I did in the ’60s.”

Anyone with even a fleeting knowledge of blues-rock will appreciate that’s no small statement. Rewind to 1965, and Kim was a lynchpin of perhaps the most exciting scene in history, establishing Savoy Brown in the first wave of British blues boomers, signing to Decca, opening for Cream’s first London show and being namedropped in the same breath as peers like Eric Clapton and Jimi Hendrix (with whom he jammed). Even then, the guitarist was emerging as the band’s driving force. “I had a vision,” he says. “And the exciting thing now is, that vision is still alive.”

Soon enough, Savoy Brown had achieved what most British bands never did – success in America – and became a major Stateside draw thanks to their high-energy material and tireless work ethic. “There’s way too much said about sex, drugs and rock ‘n’ roll,” Kim told Classic Rock magazine in 2008. “It’s such a cliché. We were all extremely hard-working guys. When we came over to America, we were like a little army. I look at that time as being filled with incredible talent.”

Times changed, of course, and by 1979, Simmonds had moved from a London he no longer recognised – “The punks were everywhere!” – to settle permanently in New York. The Savoy Brown band members came and went and the music scene shifted around him, but the guitarist stuck thrillingly to his guns and reaped the rewards, performing in iconic venues like Carnegie Hall and the Fillmore East and West, releasing more than 30 albums, and later enjoying a well-deserved induction into Hollywood’s Rock Walk Of Fame.

Coming up on 50 years in the making, Kim Simmonds’ career is sprawling and eclectic, but every move he’s made has always been underpinned by his deep love for the blues. Now, in February 2014, Goin’ To The Delta continues to bring that passion to the surface, channeling the classic vibe of the US blues masters through Kim’s modern worldview to create a musical statement that is both fresh and familiar. “Maybe Shuffles, Boogies and Blues should have been the album’s title,” notes the bandleader. “It’s certainly what you’ll be listening to for the next hour or so …”