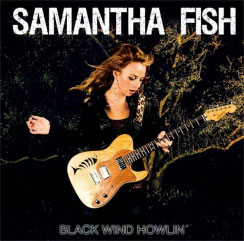 Black Wind Howlin’ is the new CD from blues-rock guitarist/singer Samantha Fish and follow-up to her 2012 Blues Music Award-winning label debut, Runaway. Produced by Mike Zito, who did the same honors on her last album, Black Wind Howlin’ was recorded at Dockside Studios in Maurice, Louisiana, and features Samantha’s blazing guitar and vocals backed by Mike Zito on guitar and vocals, plus his fellow Royal Southern Brotherhood members Yonrico Scott on drums/percussion and Charlie Wooton on bass. Special guests include Paul Thorn on vocals, Johnny Sansone on harmonica and Bo Thomas on fiddle.

Kansas City-based Samantha Fish has been on a major roll ever since she teamed up with Cassie Taylor and Dani Wilde on Ruf’s 2011 release, Girls with Guitars, and fueled by the trio’s Blues Caravan tour of Europe and the U.S., created an international buzz in the blues world. Later that same year she recorded Runaway, her solo debut on Ruf. Runaway was hailed as a thrilling opening statement, earning a string of rave reviews and radio airplay, climaxed by her winning the Blues Music Award (BMA) for “Best New Artist Debut” in 2012. “I’m truly humbled by the recognition,” Samantha said afterward. “I can barely wait to make record number two…”

Now, the wait is over, as Samantha Fish unleashes a major storm of her trademark guitar work and soulful vocals on Black Wind Howlin’. “It has a rebellious streak,” says the bandleader of her game-changing new album, “and a prevalent theme is, ‘I’m not gonna take your sh*t anymore…’”

No “sophomore slump” here, as Black Wind Howlin’ leaps from the speakers with 12 smoking tracks that chart Samantha’s evolution as songwriter, gunslinger and lyricist. “Since completing Runaway back in 2011, I’ve been on tour pretty much non-stop,” she proclaims. “I’ve spent a lot of time writing, playing and listening to music. I feel like the themes and the sound of my music have matured. To me, it’s about the human experience from my perspective, as well as people I’ve come into contact with over the last few years.”

Rather than trying to duplicate what she accomplished on her first success, Samantha re-defines her sound throughout the tracks on Black Wind Howlin’. She can be brutally rocking on cuts like the tour bus snapshot of “Miles To Go,” the swaggering “Sucker Born” and the venomous “Go To Hell.”

And yet, elsewhere, backed by the versatile production of longtime collaborator Mike Zito, you’ll find Samantha shifting gears to the aching slide-guitar balladry of “Over You” and the redemptive country song, “Last September.” She might stop off for a gritty cover of Howlin’ Wolf’s “Who’s Been Talking,” and co-wrote “Go to Hell” with Zito, but all other tracks are Samantha’s self-penned originals, and it’s a mix that will keep listeners on their toes. “I wanted this record to have a modern rocking sound,” she explains of the album’s vibe. “I also wanted it to have elements of Americana, country and roots.”

For Samantha, the recording sessions proved just as rewarding as the writing “I had a dream team of musicians and special guests,” she recalls. “And Dockside Studios quickly became one of my favorite places on earth… I really got to do exactly what I wanted to do on Black Wind Howlin’,” she says, “and I’m incredibly proud of it.”

Samantha Fish will support the release of her new album with constant touring. For more information on the artist, visit www.samanthafish.com and www.rufrecords.de.