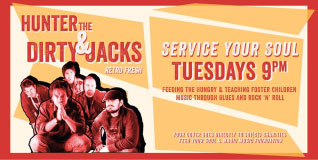 Six months ago Hunter & the Dirty Jacks, a Los Angeles-based band , launched “Service Your Soul” Tuesdays at Harvelle’s in Santa Monica, CA. The weekly residency goal was to raise money, food, and instruments for the homeless and hungry, as well as teach music to homeless and foster children. Here’s an update from the band...

“It’s been six months since we started our “Service Your Soul” residency at Harvelle’s in Santa Monica, CA and we wanted to let you know where we are at with it so far. We are pleased to report that, as we have set out to do, positive change is being created in the community through music.

- Number of hungry people fed, with funds going through our partner Feed Your Soul, subsidized by Service Your Soul – over 2,000! (2,093 to be exact)
- Number of music programs set up at Vista Del Mar foster home through Magic Music Foundation and operating regularly, subsidized by Service Your Soul – 3 There is a recording program, a production program, and a jazz program, plus co-sponsored holiday events.

Other notable stories of change:
- An 18 year old who was a foster child going out on the street, and pregnant, did not have a home. Feed Your Soul through our residency donated the money to get her a deposit on a government assisted apartment so she could have a home.
- A man that has brain trauma and is homeless, who had his iPod stolen… had the iPod replaced by Service Your Soul with songs put on it that inspire the band, in addition to his songs. Rock and blues is his most prized possession.
- Dozens of bus tickets provided to homeless people at the Santa Monica shelters so they could be able to get home to their families.

Acclaimed national touring acts who have taken time out of their schedules to donate their talents, come out on Tuesdays to jam, and help raise awareness – we couldn’t be more grateful and honored that these terrific artists decided to help create change with us (in order of appearance): Coco Montoya, Johnny Stachela, Pily Benavides, Phil Gates, Eric Sardinas, Jimmy Vivino, Kirk Fletcher, Dennis Jones, Guy King, Shawn Jones and Jeff Dale.

There are many more on the way that have confirmed they are coming out… and either are on the schedule in the future, or close to confirming when they will be on the schedule. For instance, Jeff Dale is coming this Tuesday, 7/23. Lastly, we would like to note that all of the guests that have come out have truly been AWESOME people. There’s a reason they decided to come out, because they all have big hearts and truly care. It’s important everyone knows that. These great artists have all made a huge impact in making the residency a success.

There are many fantastic stories we can tell about the special guests… such as Kirk Fletcher’s mom being a foster mother for 20+ years while he was growing up… or how Jimmy Vivino initially intended to come out for a few songs, but ended up jamming for 3+ hours… but we would like to elaborate on one story right here. After the Eric Sardinas show, we were down at the homeless shelter serving the following Sunday. Some of the people were coming up to us and asking about the dinner. They were saying how we always cooked well, but this dinner was even better, they couldn’t eat enough of it. How do we do it? We told them it’s because world-class artists such as Eric Sardinas (who came down that previous week) and Phil Gates and Coco Montoya before them were getting the awareness raised to where more people were attending the shows and therefore more money was being raised. The look on their faces said it all. People cared. Not only us, but actual celebrity, national touring musicians cared… and because of that, people cared that came out to Harvelle’s to watch the show and bring $5 or 2 cans of food. That’s the essence of what Service Your Soul is all about.

We have seen the change. We go down to the homeless shelters regularly… and provide the food with Feed Your Soul, cook it, serve it, and play for the hungry. We teach the foster children music ourselves through Magic Music Foundation. Progress is being made, but it’s only just beginning! 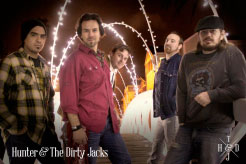 Here is what you can do to help create change. We are all a part of this, every one of us counts. Are you ready? Come out on a Tuesday to Harvelle’s and bring $5 or 2 cans of food. That’s it. That’s all you have to do. Come on in, hang out, and enjoy the show. $5 or 2 cans of food provides 2+ meals to someone going hungry right in Los Angeles, ot in some far away land (although they need the help too, and we have plans in the works to get there), but right in our community…every week. Your donation also helps provide instruments and instructors to foster children who have never had a home and never had parents, to get them inspired to learn music. Feed Your Soul and Magic Music have been doing this for years and we are teamed up with them through this residency. So come out on a Tuesday, each and every one of you, all of you. You all count and all can help with us, as we are all in it together. Then come again sometime, because we’ll make sure we do our part to ensure you enjoy the show…

Here is what you can do if you are a blues, blues/rock, or rock and roll artist: You can email us at jon@hunterandthedirtyjacks.com or call at 714.206.5720 to learn how you can get involved. We invite you to 1) come down and jam on a Tuesday… you can jam to our standards, we’ll learn your songs, whatever it takes to put on a good show… because every person that comes through the door because of your presence means 2+ people that are hungry are going to get fed a good meal, and foster children got help to learn music. You can make that happen. The guests that have come out have absolutely made that happen; 2) we invite you to participate in serving with us (that goes for anybody out there) – come down to the shelters and help us feed people, help get involved with teaching foster children music… trust us, your presence will be tremendously appreciated and remembered by the under served; 3) if you are a guest that has come out already - you were awesome! We invite you to come back, at your convenience of course... just let us know!

So that’s where we are at. It’s only a start, but change is happening. Help us make the next six months even better by helping feed more people, and helping more foster children! Every Tuesday, Harvelle’s in Santa Monica, 4th and Broadway, Service Your Soul.”