Steve Howell & The Mighty Men :: YES, I BELIEVE I WILL 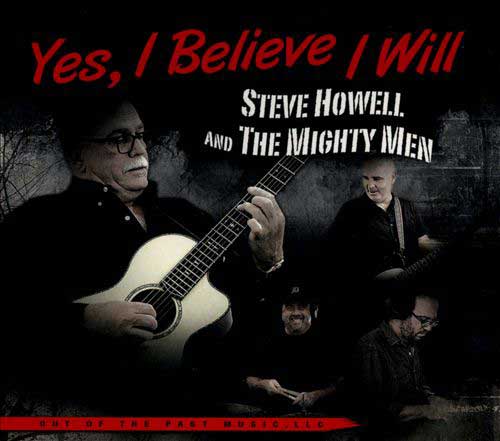 His fourth release, Yes, I Beieve I Will, finds him in the estimable company of his friends Chris Michaels (electric and acoustic guitars, bass), Dave Hoffpauir (drums) and Jason Weinheimer (keyboards) who once backed the late, renowned Jim Dickinson. A unique set of ten modern and prewar covers constitutes an extraordinary musical ramble. The mid-tempo country blues “I Had a Notion” (1976) immediately confirms his true blues creds as a guitarist and singer as he casts an evocative rural spell on the Terry Garthwaite tune containing the line “Yes, I believe I will.” “Walk on Boy” (1960) by Mel Tillis has a lilting, olde tyme feel enhanced by nimble picking , the uncommonly supple groove of Hoffpauir and the fluid electric licks from Michaels in a classic country boast with lyrics like “Well, I left my mammy and pappy, just about the age of ten. I got me a job, workin’ on the levee, totin’ water for the hard workin’ men.” A somber mood is evinced on the shuffling “Keep Your Lamps Trimmed and Burning” (1928) by the legendary bottlenecker Blind Willie Johnson who sang sacred and secular music. Howell burrows into the profound Bible lyrics with his richly expressive tenor while Michaels first echoes the melody before improvising a raw, distorted solo in dynamic contrast. On the “lonesome” lyrics of Dock Boggs’ melancholy, minor key “Country Blues” (1927), Howell “lives” through the dark temptations of life, the intertwining acoustic and electric guitars producing a web of swirling feelings.

The landmark “Future Blues” (1930), from mythical Willie Brown, contributes uplift via a snappy shuffle beat and the propulsive, unfailingly tasteful electric guitar of Michaels. “Wasted Mind” (2005) from banjoist Danny Barnes is a contemporary country ballad addressing a critical contemporary social issue with compassion and hip street poetry such as “He ain’t the first boy standin’ ‘round a beat up Chevy, wants to sing like Eminem. Get away from your momma and them, and get all trippin’.” Putting his blues stamp on a pop standard by the doo wopping Fleetwoods, Howell conjures “Mr. Blue” (1959) as a gentle ballad, his hushed, broken hearted vocals and Michaels’ silky electric solo extracting even more pathos from the surprising selection.

The heavy Delta blues of “Devil’s Side” (1980) from Nick Katzman benefits from the idiomatic “behind the beat” drumming of Hoffpauir, allowing Howell to deliver the ominous lyrics with conviction and Michaels to squeeze out menacing blues licks. The country blues standard “I Know You Rider” (1934) is taken at an exuberantly insistent tempo as Howell espouses the classic “leaving here” lyrics with just the right combination of ruefulness and anticipation. “Rake and Rambling Blade” harkens back to early British Isles music while spanning generations, the loping rhythm containing banjo from Michaels helping prove the infinite appeal of primal folk music when played with skill, vigor and dedication.

Like a great method actor, Steve Howell inhabits his music with enormous genuine authenticity. The title Yes, I Believe I Will at once declares his intent and resolve to play the blues his way, producing an unforgettable experience blurring the line between art and life.