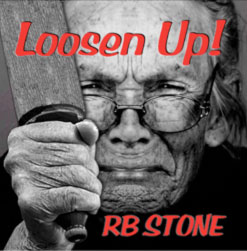 Swaggering musicians have posed as ramblers, desperados, outlaws and bad dudes. But heavyweight bluesman RB Stone was an authentic cowboy and his muscular music bucks hard and shoots straight. He has notched countless accolades and accomplishments in a variety of genres and his 16th album, Loosen Up, shows the extraordinary singer, songwriter, guitarist and harmonicist in the company of ace producer and drummer Tom Hambridge. The combination is flint on steel for a blues-busting blowout.

Along with Hambridge, Robert Britt (lead guitar), Tommy McDonald (bass) and Jefferson Jarvis (piano, organ) play like their hair is on fire on ten original numbers. “High Horse” stomps the boogie in a pointed plea to a snooty object of affection to “Get off your high horse and let that pony run free. Get off that high horse and have a little fun with me” as Britt whips his axe and Stone honks on his “Mississippi saxophone.” With a nod to classic Southern rock, “Long Gone Lonesome Blues” rumbles like a Kenworth, Stone lamenting the trucker’s lot with “The road is my livin’, it brings me my bread. But lately my woman has dreams I am dead” while Britt recklessly throttles his strings. The title track makes dust like a roadrunner, Stone preaching the gospel of enjoying life while you can through “You can’t pay the bills with a heart attack…When they pass that thing around just take a little hit” and his trump card, “When Saint Peter comes a-knockin’ you might as well be rockin’, loosen up” in his pure, blues-burnished tenor.

A dramatic shift of form and content has Stone exposing his spiritual side on the somber minor key ballad “God Heals You When You Cry.” The disarming honesty of “I was down to nothin’, knocked down to my knees. It’s there I found an answer, and I came to believe” features Britt channeling Roy Buchanan over the classic descending progression. Picking up the pace precipitously, the band raises hell on the relentlessly pounding “Texas Drunk Tank Blues,” Stone alluding autobiography with “I went to jail in Texas, drunk on Jim and Jack…Five cats in the drunk tank, just as high as I. I told jokes until the mornin’, I’d rather laugh than die” while wailing harp like a man possessed. The dark-as-mud Delta blues “A Bad Case of Blues Goin’ On” finds Britt bottlenecking with paint-peeling tone in conjunction with Stone blowing smoldering harmonica while bemoaning “The weatherman forecast 40 days of pain, said it could last longer if I don’t make a change. My doctor concurs, I’m the one to blame for a bad case of blues goin’ on.” The urban Chicago blues of “I Ain’t Buyin’ That Bull Today” is a clever take on romantic strife as Stone declares “You say you love me, if that’s so, you should let your other lover know. No how, no way, I ain’t buyin’ that bull today” while blistering the reeds on his harp.

“Gone as Gone Can Be” opens with ominous, unaccompanied slide guitar before easing into an insouciant funk groove that belies the blunt finality of “…Uh, save the drama for your mama, no need in bein’ mean. Give the anger to your new man, don’t lay that crap on me…I’m gone, gone as gone can be.” Continuing his critical assessment of the fairer sex, Stone cops to the eternal dilemma men face, their biological needs battling their better sense on “She’s Too Hot to Handle” with “My buddy Randy gotta a sister named Sandy. She’s pure canned heat, a piece of eye candy…She’s too hot to handle… I guess I’m goin’ down in flames” over a butt bumping boogie shuffle featuring Jefferson Jarvis rolling the 88s. In a rodeo the goal is to stay on the animal for eight seconds, but Stone rides his “hog” hard for 3:32 on the rip snortin’, asphalt burning “Harley Heart,” ferociously playing his cigar box guitar alongside Hambridge on drums, leaving the listener hanging on for dear life and begging for more.

RB Stone is tough as rawhide and cool as hand-tooled boots. He has lived life with gusto in order to dispense his timeless wisdom through bunkhouse poetry in a mesquite-smoked voice. Music this intoxicating does not come from a bottle, but a man’s soul.

Born in Huntingburg, Indiana, RB’s family moved to Ohio when he was one. Both parents were huge music lovers; his father, a blues/boogie, rock ‘n’ roller and his mother, a fan of Tennessee Ernie Ford, Janis Joplin, Herb Alpert, Johnny Cash, Sly and the Family Stone, Elvis and the wide variety of hits from the 60’s. At 12, his mother showed him some chords on the piano and Bill Withers’ hit “Lean On Me” was the first song he learned, which started the ball rolling in his long blues/boogie composing career.

Eighteen and just out of high school, music was still a dream that seemed to belong to others, so he hired on with the railroad traveling the Midwest with a 90-man rail gang four days a week. After two years he accepted an offer as an assistant manager at a plumbing, electric and heating store in Ohio, rose to the level of manager and accumulated a house, two cars, two trucks, and two motorcycles.

Restless at 23 RB sold everything but a truck, some harps and a guitar and headed to Colorado to be a cowboy and play music. There he met a horse trainer and lived on an Indian Reservation in Ignacio where he slept in a barn learning horses by day and teaching himself guitar at night. A few months later he got good enough at both and started getting hired by local outfitters to run back-country horse packing, wrangle horses and entertain the guests around the campfire.

Since those early beginnings, RB’s life and career have taken many twists, turns, bumps and bruises accompanied by significant accomplishments. Independent and flying under the radar he has 16 albums under his belt, toured 32 countries & 5 continents, sold over 40,000 albums most of them at his shows. He has a song catalog with “Gwen Gordy of the Motown Dynasty at EMI.” He’s had principal roles in national commercials, appeared in national music videos and his songs have been recorded by artists such as The Marshall Tucker Band. RB has worked with many major acts from Jazz Greats Hiroshima to The Charlie Daniels Band, has a 14 piece Roots Music Production Show featuring his songs, a Billboard Magazine Songwriting award, to name just a few of his achievements.

He’s been called a Blues Cowboy, Country Bluesman, Americana Artist and Roots Rocker, and he answers yes to all.