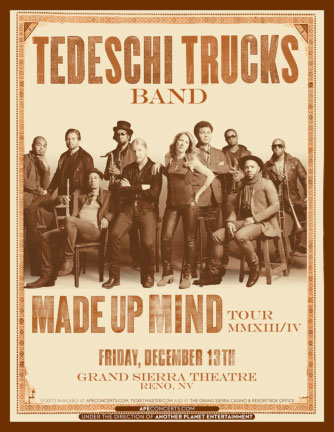 Grand Sierra Resort and Another Planet Presents are pleased to announce the Tedeshi Trucks Band will be performing at the Grand Sierra Theatre in Reno on Friday, December 13 at 8pm.

Tedeschi Trucks Band's new album, 'Made Up Mind' - released by Sony Masterworks on August 20th - has debuted #11 on Billboard's Top 200 Album chart, #1 on the Blues chart, #2 on the Rock chart, #2 on the FMQB AAA non-comm chart, # 5 on the BDS AAA Indicator chart, #4 on the Americana chart and #1 on the Roots Music Blues Chart with 26,466 units sold - Tedeschi Trucks Band's highest unit debut to date. 'Made Up Mind' is nothing less than a quantum leap forward for TTB. If 'Revelator' and 'Everybody's Talkin' were all about finding their way, this new effort is where they emerge as a fully formed band for the ages.

Advance tickets at apeconcerts.com, ticketmaster.com and at the Grand Sierra Theatre Box Office. (775) 789-2000