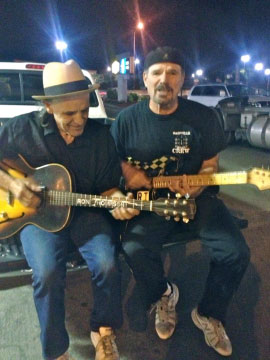 Bad things sometimes have a GOOD ending! Two weeks ago legendary blues musician Ron Thompson had his car stolen with ALL of his musical equipment in it. BLUES NOW offered a reward for the return of his equipment. Ron's team of fans and friends put the word out with fliers and emails letting the SF Bay Area community know his gear was stolen and that there was a reward being offered.

A few days ago we received a call from a pawn shop in Oakland saying that some teens had come into the shop trying to sell Ron's guitars. The owner did not buy the guitars, but did get a phone number from one of them "in case he could find a buyer". The phone number was given to Blues Now and over the past two days we negotiated a deal to get the guitars back.

Ron was speechless and in tears. But we did sit down and jam out a couple of tunes just to make sure everything was in working order! That is when Ron put a smile on his face!