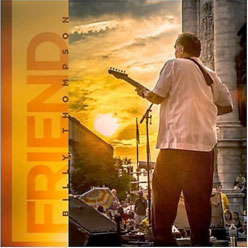 Billy Thompson’s  highly anticipated new release, Friend, was conceptualized and recorded with the intention of delivering an ensemble in a live room setting. This was accomplished by laying the basic tracks down in an old grist mill, delivering an open, old-school tone.

Billy Thompson has been delivering virtuosic guitar work that has electrified audiences in the U.S. and throughout Europe, setting the tone for this veteran musician’s sizzling performances, both live and in studio. In his original music, he combines world class slide guitar, searing licks and soulful vocals with a unique amalgamation of styles including blues, rock, funk, New Orleans and R&B.

Billy's last full-length release, A Better Man, was nominated by Blues Blast Magazine for 2012 Contemporary Blues Album of the Year. Friend has received excellent reviews nationwide including "Bluesbreaker of the Week" on Dan Aykroyd's "Elwood's House of Blues Blues Hour" as well as “B.B. King’s Bluesville’s Pick To Click” for several months.