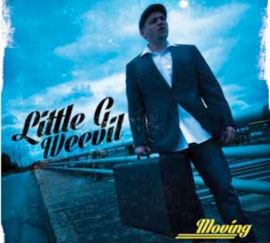 Moving, the brand new, full acoustic release by Little G Weevil out on Vizztone Label Group, includes eleven original numbers and a cover of the beautiful southern blues ballad, "Let`s Talk It Over (Come Back Baby)." Moving features a soulful, tight band on three tracks and shows Little G at his very best.

Little G has been making records in Europe and the United States since 2001 — His 2012 release, “The Teaser” was ranked Top 10 Best Blues Album of the Year by the elite Mojo Magazine.  After returning to Memphis to win first place as a solo artist at the2013 International Blues Challenge, he decided it was time to record Moving – a beautifully ambient album of deep, all-acoustic Blues.

Little G. Weevil is an international Bluesman, an award-winning blues guitarist, singer and songwriter, and one of the most deeply moving entertainers on the American Roots and Blues scene today. Growing up in Budapest, Hungary, at a time when the changing political landscape brought the Blues flooding into Eastern Europe, Little G fell in love with American Blues records and soon became a successful Blues artist in his own country. He felt the call of the American South and moved to the United States, living first in Alabama, then moving to Memphis, Tennessee, where he spent a year washing dishes and performing on Beale Street, and finally settling in Kennesaw, Georgia.

“…recalling the foot banging percussion of John Lee Hooker, the directness of Mississippi John Hurt and the string bending, slide acumen of so many greats. … any lover of the canonized, traditional old time blues cats will go nuts for this set. It’s loaded with so much heart and heat that you can’t help but stuff the ballot boxes for any blues awards he might be up for. Killer stuff.”  – Chris Spector, Midwest Record