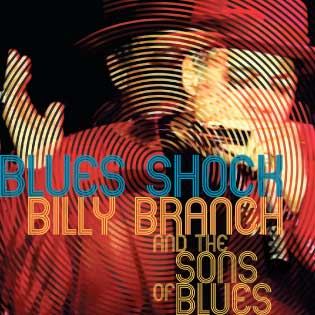 Blues Shock represents the first studio-recorded release in nearly fifteen years from veterans Billy Branch and the Sons of Blues, and their first for Blind Pig.

The result is a fascinating mix of daring, and full-bodied new compositions and fresh-sounding standards that followers have long savored at their live shows.

Speaking of ‘blues shocks,’ it hardly seems possible that Billy Branch—once touted as one of the ‘new generation’ of blues musicians—is verging on elder statesman status in the blues community.

Over a career spanning close to forty years now, Branch has become one of the blues’ most eloquent spokespersons and an ardent evangelist and teacher of the blues, not to mention an award-winning veteran artist on the Chicago, national and international music scenes.

“I’m on close to 200 recordings at this point,” estimates Branch. But this one feels destined to be one of the standouts. The virtuosity and sheer exuberance that Billy and the SOB's bring to this stylistically diverse material make for a recording sure to garner accolades from critics and fans alike.

The centerpiece of this recording is clearly “Going to See Miss Gerri,” a tribute to Gerri Oliver, whose 47th Street Palm Tavern was a landmark and a center for Chicago's Bronzeville nightlife for decades until City Hall removed it in order to build an as-yet unfinished “Blues District.” “Gerri called me her son. She used to come to my shows. And I used to spend a lot of time down there. Gerri is in a nursing home in Jackson [MS]. We took the song down to her, and I played it for her. She’s 93.”

“But I’ve been kinda like this underground person,” says Branch with a laugh, referring to his 15 year studio hiatus. “Hopefully this will, like the title says, create a ‘blues shock.’ ”

"Blues Shock shows there's plenty of fun and fresh ideas to be found in a form as time-tested as Chicago blues. It's a great set." - All Music Guide

"Unwilling to limit himself to tried-and-true harp chestnuts, Billy Branch pushes the envelope just enough to keep this set fresh and bracing while retaining the bedrock blues attack that’s rendered him one of Chicago’s favorite club draws for decades. It’s been too long since he released a new album, but it was worth the wait." - Chicago Blues Guide