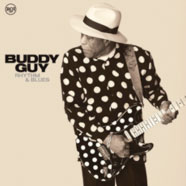 Chicago Sun-Times - Buddy Guy is a smart guy. Chicago’s living face of the blues — who turned 77 last week — is worried about the lack of blues music on commercial radio (with the exception of Chicago’s WXRT-FM). So he is using the polished sound of his new double CD, Rhythm and Blues, to back-door the blues into rock stations.

The first CD consists of 11 tracks packaged under “Rhythm,” and these are the radio-friendly cuts. They range from “Justifyin’,” anchored by a 1980s funk bottom, to the splendid, Muscle Shoals-influenced soul ballad “One Day Away” with guest vocalist Keith Urban (although Dan Penn would have been a better choice).

Producer Tom Hambridge polishes the sound around Guy and puts the vocals way up front on each of the discs. Hambridge received a 2008 Grammy nomination for producing Guy’s “Skin Deep” and also was behind the wheel for George Thorogood’s Chess Records tribute “2120 S. Michigan Ave.”
The 10 tracks on the “Blues” disc will satisfy purists, especially the traditional acoustic introduction to “I Could Die Happy” and the uptempo jam with Gary Clark Jr. on “Blues Don’t Care.” Chicagoans will adore “Meet Me in Chicago,” a contemporary rock-blues anthem where Guy sings about sitting on a roof at Wrigley Field with a cold wind coming off the lake (he is a Cubs fan) and “Soldier Field, Comiskey Park, I’ll be looking for Al Capone.” 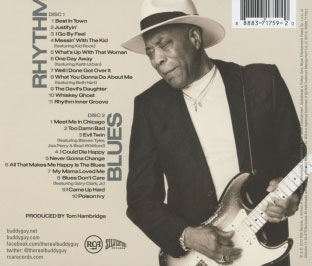 Well, Capone did operate from the old Lexington Hotel near the Chess studios on the Near South Side.

The “Blues” sessions also feature the summit of Guy with Aerosmith guitarists Joe Perry and Brad Whitford as they turn up the volume on “Evil Twin.” Aerosmith vocalist Steven Tyler takes a crack at sharing vocal duties with Guy.
Elements of surprise are what give “Rhythm and Blues” its staying power.
A sizzling workout on Guitar Slim’s “Well I Done Got Over It” pops up on the “Rhythm” side as Guy pays effervescent respect to one of his musical mentors. Kid Rock channels the late Junior Wells on Wells’ 1960 Caribbean-tinged hit “Messin’ With the Kid.” Guy and Hambridge write a haunting blues framework around “Devil’s Daughter” which blends seamlessley into “Whiskey Ghost,” a Hambridge co-write with Nashville songwriter Gary Nicholson (Dixie Chicks, Kenny Chesney, Etta James, etc.). Saving the best for last, the tight jump-swing arrangement of Willie Mabon’s 1954 hit “Poison Ivy” puts Guy’s 1954 Fender Stratocaster in another stratosphere. Guy growls, “I’m like poison ivy, I’ll break out over you.”
“Rhythm and Blues” is bound to break down traditional barriers.