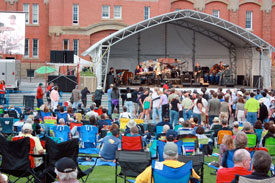 Calgary International Blues Festival is pleased to announce we will be running July 29th to August 4th, in spite of the massive flooding of the two major rivers that intersect in the heart of the city. On Thursday, June 20 one of the biggest floods in more than 100 years began, leaving 100,000 people evacuated, the downtown area closed and the mayor calling a state of emergency for a two-week period.

In true Calgary spirit, people pulled together, with neighbors and strangers alike bringing communities back to life. In a powerful movement of humanity, large parts of the city have been restored to their pre-flood state, roads have been rebuilt, transit restored, businesses returned to work, and many returned to their homes. Miraculously, Shaw Millenium Park, home of Calgary Bluesfest, was left untouched by the flood and we are fortunate to say we'll be running as planned.

We thank the Blues Festival Guide for this opportunity to welcome you to visit our fair city, not only to take in its natural beauty but also the warm hospitality Calgarians are known for. The best of it? You’ll hear some of the finest blues on the planet! Find tix, full schedule and more info here.