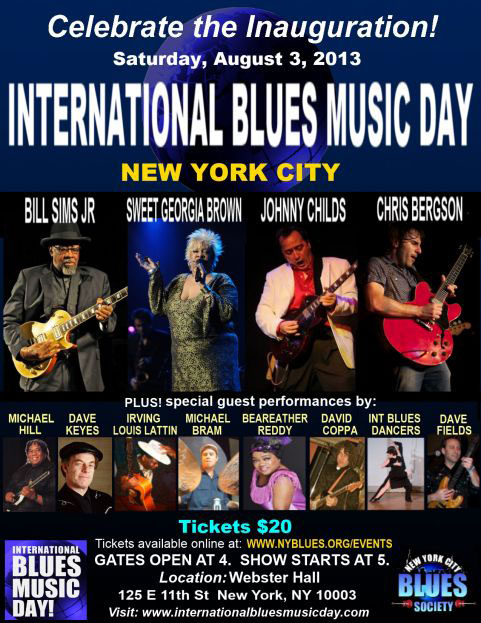 This event will coincide with over 100 simultaneous Blues concerts (worldwide) to usher in inaugural "International Blues Music Day.". Established by blues musician Johnny Childs, and the IBMD organization whos board he chairs and in partnership with the NYC Blues Society.

In August 2011, Johnny Childs with the support of over 15,000 Blues fans and musicians, circulated a petition to officially designate the first Saturday in August (of every year) as International Blues Music Day in order to highlight the Blues Music Genre. The Mission: "To celebrate, promote and preserve the rich legacy, tradition, and future of the great American art form and international language known as Blues music" and its diplomatic role of uniting people in all corners of the globe. International Blues Music Day is chaired and led by renowned Blues guitarist and songwriter Johnny Childs, who serves as the President for the NYC Blues Society and Director of the IBMD Organization.  IBMD is the lead nonprofit organization charged with planning, promoting and producing this annual celebration.  The inaugural International Blues Music Day is set for August 3, 2013.

International Blues Music Day brings together communities, schools, artists, historians, academics, and Blues enthusiasts all over the world to celebrate and learn about Blues and its roots, future and impact; raise awareness of the need for intercultural dialogue and mutual understanding; and reinforce international cooperation and communication. Each year on the first Saturday of August, this international art form is now slated for recognition for it's vast musical works, contributions, influence, tradition and for promoting peace, dialogue among cultures, diversity, and respect for human rights and human dignity, eradicating discrimination, promoting freedom of expression.

New York City has been named the 2013 Global Host City for International Blues Music Day. The city will host a weekend long series of Blues events including workshops and seminars, panels and roundtable discussions, film screenings, student master classes led by prominent musicians and educators, and a major evening performance at Webster Hall that will be broadcast on public television stations worldwide. IBMD, worldwide Blues Societies and Blues presenters will continue their partnership to encourage schools, universities, libraries, arts organizations, community centers and other entities in UNESCO’s 195 member states to host Blues concerts and educational programs on International Blues Music Day in order to reach people of all ages and backgrounds.

Find this press release in its entirety here.