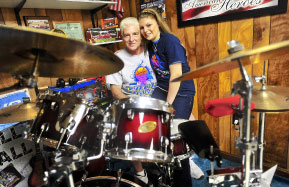 (Lt) Dennis Hooker of Mechanicsville and his daughter, Brittany Hooker, help keep blues festivals going, 15 years after an inaugural event raised funds for a charity that assisted her amid a childhood illness. (Staff photo by Reid Silverman)

SoMdNews - During the years when a young St. Mary’s girl lived mostly in a hospital, battling a rare form of cancer, a charitable organization offered a trip to Walt Disney World. That gift spurred her father’s gratitude and brought an annual blues concert to the Chesapeake Bay [Maryland].

Brittany Hooker, now 23, was declared cured of the disease a dozen years ago, and the Chesapeake Bay Blues Festival that began in 1998 at a state park in Anne Arundel County is still going strong. This year, Dennis Hooker and his daughter are gearing up, with her uncle and cousin’s impresario talents, to bring the music — and the help it provides — closer to home.

In November of 1994, Brittany Hooker was 5 years old and diagnosed as having bilateral Wilms tumor, a cancer that affects the kidneys of young children, according to her father. For about two years, she was in and out of then-Georgetown University Hospital.

“Most of that was in the hospital,” Dennis Hooker, 58, recalled as he and his daughter had lunch together last month at a restaurant near his Country Lakes home. “They would let her come home for a few days,” he said, “and then her blood counts would drop and we would have to rush her back to the hospital. We were on a first-name basis with the people at Georgetown.”

The young patient eventually could receive her treatment through Dana Russell’s help at then-St. Mary’s Hospital’s OPIS program in Leonardtown, where the child could watch movies and style the hair on mannequins during the procedure.

Hooker wanted to raise money to benefit the foundation that had been so generous to his daughter and her family, and he met with his brother, Don Hooker. “He came up with the concept of the blues festival,” Dennis Hooker said. “We talked about it, and we just did it.”

They rented a portion of Sandy Point State Park for 1998’s inaugural event, and about a dozen bands performed during the two-day event. Little Feat, Buddy Guy, Johnny Lang, Koko Taylor and Delbert McClinton were among the headliners.

“We learned right away that we needed more space,” Hooker said, “because we had one hell of a turnout. This thing’s taken off like you can’t believe. We just wanted to have a little blues party. Now, we have 10,000 people at the party.”

From the onset, the festival has drawn on members of the Hooker family, employees of the two brothers’ companies and additional volunteers from the growing list of benefiting charitable organizations to put in the man-hours to make each year’s festival happen. Beginning when she was about 13, Brittany Hooker started helping out, and learned how the gratitude for the help she’d received as a younger child was what got things started.

“The first year I started doing the blues festival, I became aware,” she said. “I was backstage. I cleaned the artists’ trailers, and made sure that everything was stocked for the next group to go on stage. Whatever they requested is what went into that trailer.” Her father added, “They might want a plate of spaghetti, from somewhere in Annapolis.”

The work made the teenager familiar with a genre of music, and its players. “I never knew them before, but I got to know them when I heard them,” she said. “It made her a blues fan,” her father said. “That’s for sure,” she concurred, recalling her opportunities to meet performers including Guy, Bonnie Raitt and Patty Reese. “Blues people cannot be beat,” her father said. “You never have any problems with them.”

The fundraising aspect of the festival eventually shifted to nonprofit organizations closer to home and in greater need of support, Dennis Hooker said, including Special Olympics-Maryland, the Johns Hopkins Cleft and Craniofacial Center, We Care and Friends in Anne Arundel County and Special Love, a Virginia-based organization that started a camp for children with cancer and now hosts a camp for siblings of cancer patients at Camp Maria near Leonardtown. Kevin Hooker, his son, is a counselor at the camp in St. Mary’s.

Don Hooker and his daughter, Sarah Petska, now operate Chesapeake Bay Events Inc. Dennis Hooker contributes his services as the owner of a security and wiring company, along with handling transportation and parking, while other volunteers pitch in to help with ticket sales, food and beverage sales, cleanup tasks, carting ice and other supplies and checking in VIPs and the performers.

Working backstage is still the primary role of Brittany Hooker, a Wicomico Shores resident who now teaches infants at a learning center. “Our family still stays involved, even though she’s cured. Once you’re involved in this, you can’t let it go,” Dennis Hooker said. “Don is the brains behind it; he is the promoter. He put the whole thing together, and we go in and put it up and take it down.”

A nonprofit group called End Hunger in Calvert County approached the Hooker family. “We got together with them, and said, ‘We think we can help,’” Dennis Hooker said, adding with a chuckle, “now that we’re seasoned concert promoters.”

Southern Maryland Blues Festival 2013 will be held Sept. 7 and 8 at the Calvert County fairgrounds on Route 231 in Barstow near Prince Frederick, featuring the Marshall Tucker Band and Canned Heat.

“It sounds like fun. We’re just going to try it out and see how it goes,” Hooker said, and all the regular volunteers who helped out again in May at Sandy Point are on board for the upcoming Calvert event. “No one said no,” he said. “No one has turned us down.”

The festival’s organizers hope their southward shift also will tap into a bigger pool of local blues fans.
“We’re hoping to get some more people from Southern Maryland,” Dennis Hooker said. “We’re bringing it home to them.”

If you go:
Southern Maryland Blues Festival 2013 will be held Sept. 7 and 8 at the Calvert County fairgrounds on Route 231 in Barstow near Prince Frederick, featuring the Marshall Tucker Band and Canned Heat, along with about a dozen other musical groups. For more information and tickets, go online to www.somdblues.org.