Live filming of Original Legends of The Blues 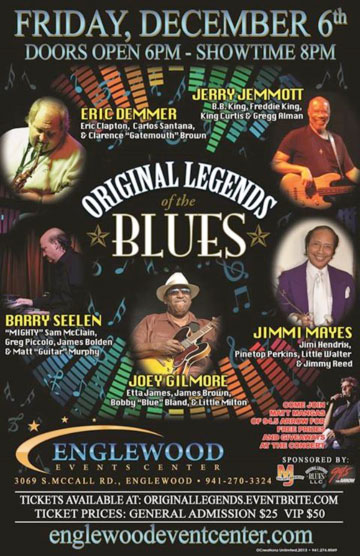 Do not miss the live filming of the Original Legends of The Blues in concert on Friday, December 6, 2013, 8pm at the Englewood Event Center, Englewood, FL. Traditional Blues like you've never seen them before.

The Original Legends of The Blues is a super-group of musicians with over 200 years combined experience  who have formed to bring back some of the great traditional blues tunes they were part of making. There will be a new twist on some old favorites as a CD is in process, as well as original, new material.

Tickets for this event are $25 general and $50 VIP and available here.

The artists involved in this group consist of the following:

The "Amazing" Jimmi Mayes, drummer and vocals: Last living drummer to play and record with Jimi Hendrix. Mr. Mayes resume reads like a who's who in blues. From Jimmy Reed to Little Walter to James Brown to Pinetop Perkins, Willie "Big Eyes" Smith and Hubert Sumlin, Mr. Mayes is a true legend.

Jerry Jemmott, bass: Busting out of the Bronx with "Pucho & The Latin Soul Brothers" he went on to become a mentor to Jaco Pastorius and many others. As the recipient of The Lifetime Achievement award from Bass Player in 2001, you've heard Jerry playing with King Curtis, Aretha Franklin, Freddie King, Nina Simone, Big Maybelle, John Lee Hooker, BB King and many other blues and rhythm and blues artists from the 60's and 70's. In addition to "The Original Legends of The Blues," Jerry leads his own band, "JJ & the Kingpins," is Gregg Allman's bass player and is the inventor of a software program that utilizes ColorSounds. Jerry is the real deal. If you know blues you know Jerry Jemmott

Joey Gilmore, guitar and vocals: A Florida legend, he has shared the stage with James Brown, Etta James, Bobby Bland, Little Milton, Johnny Taylor, Bennie Latimore, Betty Wright, Jackie Moore, William Bell, Clarence Carter and numerous others. In January 2006 Joey traveled to Memphis to compete in The International Blues Challenge. This is one of the most distinguished and internationally coveted award in all of blues. The Joey Gilmore Band outscored all bands worldwide while showcasing his amazing talent at a blues industry event as the “Best Unsigned Band” on the planet. Joey is proud to represent the Blues Foundation as the winner at every sponsored event, being an ambassador of the blues for the Foundation and the blues community. In 2008 Joey was awarded the Blewzzy award for best song, “All Over You.”

Eric Demmer, sax: Having started in Houston, I can proudly say I got Eric his first gig with Guitar Slim and Clarence Green, two Houston legends. I then got a call from one Gatemouth Brown who was in town and needed a sax man. Eric left that night and played with Gate 12 yrs. until his passing. He has also played with Eric Clapton, Carlos Santana, James Bolden and the list goes on and on. Truly one of the Blues great horn blowers.

Barry Seelen, Hammond B-3, keyboards: With a degree from The Hartt school of Music, Barry has toured the world with Blues greats such as Mighty Sam McClain, Matt "Guitar" Murphy, Greg Piccolo and more. He is in high demand as both a touring and studio musician. His current studio projects include this band, as well as James "Boogaloo" Bolden  (B.B. King), and Mark May.

Now booking festivals and special events at Mill-Jenn Entertainment and Original Legends of The Blues, LLC - 941-763-2880