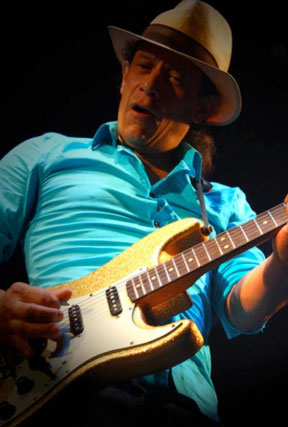 MusicDish*China announced it has booked French blues guitarist and singer Pascal Cosimo to a residency at Oldwood Village, a livehouse in Jiaxing, China. Cosimo will perform six days a week as the house band over the month of September.

Pascal Cosimo plays in the pure tradition of American blues rock, influenced by Chicago, Texas, Mississippi, Roots and Blues/Rock of the 70's. In 1999, he founded Cosimo & Co Blues Band who opened for Bill Perry in Marseille and participated in the 2002 album 'Toulon City Blues' directed by Tandem. The same year, the group opened for Popa Chubby at the Zenith Omega Live in Toulon. They have since performed at over 1000 concerts and festivals, and recently released their third album 'Blues is life.'

MusicDish*China (http://china.musicdish.com) serves as a bridge between East & West, working with major acts from Taiwan (sa. Golden Melody Award winners Jolin Tsai, Mayday, Da Mouth) and China (Shanren) while developing Western acts for the Greater China market. MusicDish*China has partnered with key events, from Midi and Zebra festivals to the Sound of the Xity conference that, in combination with its social media presence, has given it a unique brand positioning in the market. MusicDish also provide distribution/marketing and touring for Western acts such as Toulon-based Voodoo's 12 shows-9 cities China tour last spring. MusicDish*China recently signed electronic acts DJ Code and RED for international management.