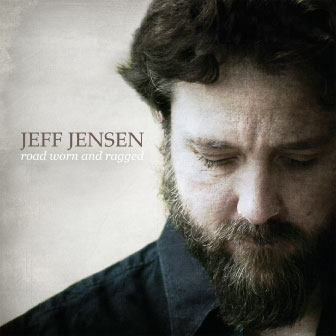 Jeff Jensen has been a musical work in progress for over a decade, blending Blues, Soul, West Coast Swing and Americana into a mature sound that now defines his latest highly-anticipated release, Road Worn and Ragged.

Having moved to Memphis, TN from Portland, OR just two years ago, Jeff immediately began touring with Beale Street staple Brandon Santini and recently co-produced and co-wrote on Santini’s acclaimed album This Time Another Year.

Recording almost entirely live at Ardent Studios in Memphis, Jeff subtly emphasizes substance over hype, all the while never shying away from the extreme energy and honest emotion that he is well known for. On the heels of his last two highly acclaimed nationally distributed albums (“Self-Titled”-2007 & “I’m Coming Home” -2009) “Road Worn and Ragged” will be serviced to over 600 radio stations and media outlets.

With an exciting mission to assemble the finest group of musicians, Jeff finds a powerhouse group of friends that share his passion for musical exploration. Complete with brand new fiery tracks like “Brunette Woman” and “Crosseyed Cat” to the risky emotional honesty of “River Runs Dry”, this album shows the progressive maturity of a consistently growing artist.
Road Worn and Ragged features bassist Bill Ruffino, James Cunningham on drums, Chris Stephenson on organ and Wurlitzer, Brandon Santini on harmonica and 2013 BMA Winner Victor Wainwright on piano. Wainwright also co-wrote the swinging “Raggedy Ann” and produced four of Jeff’s vocal tracks. The one and only Reverend Billy C. Wirtz even chipped in by co-writing the easy shuffle with stinging honesty, “Good Bye Portland.”
“Jeff don’t chase any ghosts of Robert Johnson, or fall into the pitfalls of coming off gimmicky… He brings the goods with this no-nonsense production and I can’t help but conclude that his songs were constructed for the express purpose of taking on and winning over an audience… something I greatly admire and something he and his band have the extreme talent to do!” – Victor Wainwright (2013 BMA winner)
www.jeffjensenband.com