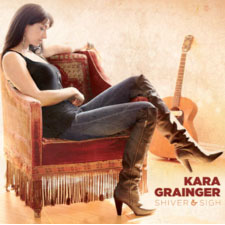 Australia native, now Los Angeles based, Kara Grainger first picked up the guitar at age 12. She started performing in the late '90s as lead vocalist and guitarist with the successful Sydney-based blues outfit, Papa Lips. With her brother, acclaimed harmonica player Mitch Grainger, Kara and Papa Lips enjoyed a quintessentially Australian experience. Fuelled by national ABC Radio play for their two albums, "Harmony" and "High Time Now," the band toured up and down the sun drenched beach towns of Australia's east coast in an old Tarago van. They blew away audiences, soaked up the outdoor lifestyle, and notched up experience at all the significant blues and folk festivals along the way. In 2006, Kara signed to Australia's Craving Records as a solo artist who encouraged her to go to the United States to record the album. In 2008 she moved to Los Angeles, but continued to split her time between LA and Australia. Her debut CD, 2008’s, Grand and Green River, received first prize in the IAP awards in Austin, Texas and also was in the top 40 Americana charts for over 34 weeks. In 2011, she released LA Blues.

Over the past several years, Kara Grainger has toured extensively throughout the U.S. and performed on the festival circuit in Europe, Australia and Asia. She has also opened the show for many great artists, such as Buddy Guy, Marc Cohn, Peter Frampton, and Heart. In October of 2012, Kara performed at the Rock n Roots Festival in Singapore where she opened the show for Robert Plant and his band. So what drives Kara Grainger? In short, she has an unflinching desire to express herself combined with a daily dedication to her craft. In person, she exudes depth, grace and authenticity. Of the songwriting process, Kara says, "While many of my songs are framed in tales of hardship and heartbreak, they're really representative of life's spiritual challenges, and for me, a quest for the ultimate truth. It's very healing when the right words come for a song, so much so that when I sing them, it's like something is finally resolved." Kara is a unique talent whose music uplifts and inspires audiences around the world.

"Classic songwriting skills, smooth sultry vocals, and the ability to whip up a storm with a fiery slide guitar. Very few can boast this set of trump cards, but it just happens to be the hand dealt to Australian singer, songwriter and guitarist Kara Grainger, who exhibits an effortlessly seductive and modern take on roots, blues and soul music." - Americanaroots.com

"As a vocalist, Grainger has a throaty register that distinctly recalls Bonnie Raitt" – Austin Music Source
"What an amazing talent she is. The Australian born singer/songwriter has been cranking out her soulful blend of blues and folk for several years and is just now starting to receive some long overdue acclaim here in the States... She plays with passion and grace...This is someone you're going to hear a lot about." – Vinylpile