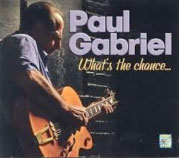 For decades, Paul Gabriel has been a regional treasure in New England, and his previous forays into recording have brought him accolades from fans, critics and fellow musicians alike. In a career that spans over 40 years, Gabriel appeared on three albums by legendary singer/songwriter Harry Chapin, played slide guitar on Rory Block’s Grammy-nominated album, Mama’s Blues, toured with Michael Bolton and recorded and toured with his several of his own bands.

Now, with the release of What’s the Chance, Paul Gabriel truly steps into the spotlight on an album of 13 tracks that not only showcases him as a distinctive, bluesy guitarist, but also a talented songwriter and a master of diverse musical styles. Throughout the new disc, he takes the listener on a trip of blues, R&B and even excursions into jazz, as evidenced by the two instrumentals on the CD, “328 Chauncy Street” and “C.M.C.” On the lone cover, Chris Kenner’s “Something You Got,” Gabriel does the Crescent City proud with a lowdown and swingy take on the New Orleans gem.

Gabriel and Robillard have known each other for many years and the two had a great simpatico in the studio, trading guitar solos on several cuts, including the jumpin’ opener, “Old Time Ball,” “Ride, Ride, Ride” and the aforementioned”328 Chauncy Street.” Original Paul Butterfield Blues Band member Mark Naftalin joins in the fun on two tracks, playing piano on “Devil’s Daughter” and the duet spot with Gabriel on “Fine At’tire,” a hipster/rhythm and blues tune that recalls the best of the early ‘50s sound.

“I first saw Duke Robillard perform around 1968 with a new band called Roomful of Blues.” recalls Gabriel. “Our paths crossed many times over the next few years leading to the eighties, and at some point I realized that I needed to absorb what Duke was doing. Eventually we got together (1983), sat down and just played at Duke’s house. He encouraged me about the things I did well and helped me correct the things that I was doing wrong, all the time treating me as a peer and always giving me little clues that would help develop my style further. During the ten years with my band, Blue in the Face (1987-1997), I did numerous shows opening for Duke, continuing to learn from him. In 2011, I did a show with him, playing solo and performing some new songs I had written in anticipation of a new release. One of the songs I played was called ‘Roomful of Blues.’ Duke asked me if I had recorded that yet, and I said I was saving it for the new release. Later that year, I headed to Rhode Island to start recording the new album with Duke producing. Right from the beginning, the magic was happening. The band, engineer Jack Gauthier and Duke all became one, as the chemistry created something very special, and in my opinion, the best album I have ever done.”

What’s the Chance was recorded and mixed at Lakewest Recording. “Some very special equipment was used during this recording,” said Gabriel about the sessions, “including a Sony 24-channel tape recorder, real tape delays and a lot of really great guitars and amps. I used a 1954 Gibson ES-5, a 1963 Fender Stratocaster, a 1966 Fender Jazzmaster, a 1965 Fender Super Reverb and a 1965 Fender Twin Reverb. Duke played a variety of Fender guitars, Teles and Strats, Epiphone Casino, a Gibson Midtown, and a 1947 Gibson L-7 archtop. Billy Bileca used a 1966 Fender Precision bass and a 1947 Kay upright bass. Mark Naftalin played a real piano and Larry Fallstrom a 1961 Hammond B-3 and Leslie tone cabinet. Nick Longo used a lot of old drums and Bruce Bears played a variety of keyboards by Nord. The horn section used a variety of 50s and 60s era instruments that produce a sound that only they can.”