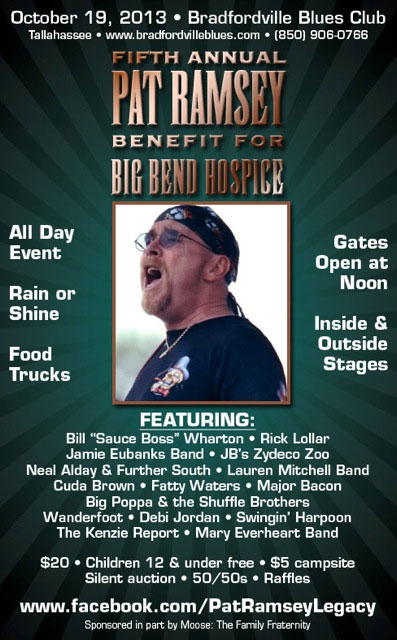 A great day of music, in support of a great organization, in memory of a great musician and person!
"This Was His Wish, To Give Back"

This will be our 5th year benefiting Big Bend Hospice in Pat's honor. Pat Ramsey
patramsey.com was a well known and loved person, musician & blues singer around the globe. Pat passed away on Nov. 17, 2008 but his music lives on and he is remembered in the hearts of his family, friends and fans.

As you can see we have many new bands for you to enjoy this year. Remember, all of these bands & musicians want and asked to play and ALL are giving their time and talent for Big Bend Hospice. All have their own experiences with hospice and they also want to give back for the love and care given to their loved ones, and for the love they had for Pat. Please remember when you are at the event to let these musicians know how much they are appreciated. We want this year to be our best year yet so tell all your friends.

There will be a silent auction (accepting donations) as well as a 50/50 drawing, numerous raffles throughout the day, with a big raffle item for the final drawing. Silent auction ends at 9pm. All proceeds are going to Big Bend Hospice in Pat Ramsey's name. If you can't attend the event and would like to show your support by making a donation in Pat Ramsey's name, you can do so at bigbendhospice.org . Click the "Make A Gift" link.

Mark your calendars, tell your friends, and we hope to see you there! Bring your children - there's plenty of room for them to play. Free for age 12 & under or if you wish... give a donation.

Gates Open at Noon - Rain or Shine!
Food on Site plus Food Trucks
$20/Person, Children 12 & under are Free
$5/campsite

NOTE: Please, no pets, no coolers and no alcoholic drinks not bought at the club. Overnight rough camping and RV parking space is available and encouraged. DO bring chairs, blankets, bug spray, cameras and good attitudes!

To inquire about sponsorship opportunities, contact Debbi Ramsey at (850)284-6967 or debbiramsey@gmail.com.

Pat Ramsey Biography:
Born in Shreveport , Louisiana in 1953, Pat Ramsey began playing the harmonica at the age of 17. After a couple of years honing his chops while hitchhiking around the US , Pat joined the Bunny Brooks Band in Denver (an offshoot of the 60's band, Jam Factory) in 1973.

In 1978, he impressed Rick Derringer, who told Johnny Winter of this "long haired kid in Denver " who played a mean harp! Johnny liked what he heard so much that he hired Pat to play all the harp parts on the album "White Hot and Blue".

In late 1978, Pat met Butch Trucks of Allman Brothers fame. After a couple of sizzling jams in Colorado with Butch and his band, Trucks, Pat signed on, and made the long move to Tallahassee, Florida. When the Allman Brothers Band reunited in 1979, Butch disbanded Trucks and introduced Pat to a local Tallahassee band called Crosscut Saw.

Julien Kasper, a seventeen year old guitar prodigy and Pat became partners and the band quickly thinned from seven to four when they decided to take the band on the road. In the next five years, Pat and Crosscut Saw played every Juke Joint and Roadhouse from Key West to Connecticut . They opened for B.B. King (twice), Johnny Winter, Johnny Van Zandt, .38 Special, Bobby Bland, The Nighthawks, and others. Before disbanding, Crosscut Saw released their album "Mad, Bad and Dangerous to Know". Crosscut Saw's annual reunions are still one of Tallahassee 's top draws!

In 1985, the Pat Ramsey Band was formed when Julien opted to study Jazz at the graduate level. They opened for many notables as well, including a seven-city tour of Florida (in 1987) with his old friend Johnny Winter.

Pat moved to Sarasota , Florida , in 1991, to play with his friend from the Freddie King band, guitarist Greg Poulos. The Poulos-Ramsey Band was born. Within months they were opening for acts like Charlie Musslewhite, Solomon Burke, Albert Collins, Ronnie Earl, James Cotton, and Pinetop Perkins. Jerry Wexler hailed them as " Sarasota 's ONLY Blues Band"! Two years later, they were ready to make the jump to Memphis , TN. Alas, while Pat was busy scouting gigs in Memphis , tragedy struck Greg's family in Florida , bringing a premature end to this endeavor.

A new face in a new city , Pat began dealing craps in a casino on the muddy Mississippi River, an hour south of Memphis . Jamming on Beale Street on his days off, Pat was quickly accepted by local musicians and was hired to play at "Blues City Cafe" as part of the house band. Living out of a trailer in a nearby fish camp, Pat scrimped and saved for the next two years.

With the help of his old friend Julien Kasper (now PROFESSOR Julien Kasper at Berklee College of Music, Boston ) and some of the best local Memphis musicians, Pat produced the aptly titled CD "Its About Time". The CD received very strong reviews and Pat began touring once again. Pat's stellar live performances with The Blues Disciples produced the live CD's, "Live at the Grand", and "Live at the Big Bend Blues Bash" and the posthumously released "Live in Key West ".

Pat passed away on Nov. 17, 2008 but his music lives on and he is remembered in the hearts of his family, friends and fans.