Blues? At the Beach? In November? Yes. Yes. And Yes! 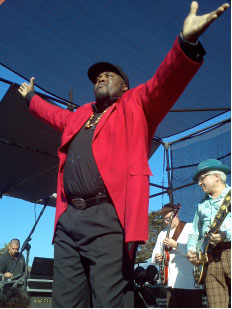 Attendees at this November 2, 2013 event were treated to a sensational day of musical performances, in a picturesque state park environment, on a sun- soaked Saturday in Ventura, California.

Rumor has it that musicians have two venues on their itinerary these days... Austin, Texas and Ventura, California. This fits well into the master planning of Ross Emery of Roadshow Revival and Kat Merrick of Totally Local VC, who foresee growing this one-day event into a premier two-day spectacle in the coming years. Kat told me their vision is that Blues at the Beach will become a fall season, Doheny-like event for blues fans to soak up the San Buenaventura State Beach experience.

As is, Blues at the Beach is a family friendly event offering top blues artists, a variety of food vendors including chicken, tri-tip beef and oysters. Other booths featured jewelry, clothing, CD's, and there was even a classic car show to boot!.

The event kicked off at 10:45 a.m. with a flurry of terrific sets by: The 44's who had driven all night to make the show; The R&B Bombers who made a triumphant return to the stage after a one-year hiatus, enthralled festival goers with their nine-piece, horn inspired, big band/swing/cajun sound; Local Ventura artist Guy Martin thrilled with his SRV influenced vocals and guitar riffs. Martin's standouts included "The Sky is Crying" and "(Doing Pretty Good for the) Shape I'm In."

James Harman, the self proclaimed "full service Bluesman since 1962," not only entertained with his unique harp stylings, but also provided numerous crowd-pleasing stories that fit perfectly into the sun-soaked afternoon.

The Mannish Boys Revue featuring Sugaray Rayford amped up the venue's vibe. Guest appearances included Kim Wilson of the Fabulous Thunderbirds and also Cynthia Manley who dueted with Sugaray on a stirring version of "We Belong Together."

Headliner Elvin Bishop and band capped the day with a rollicking selection of blues, country and cajun influenced songs and featured the smooth vocals of drummer, Bobby Cochran. The band was also joined onstage by Kim Wilson. Always a crowd pleaser, Elvin shouted out he was being allowed to play a little longer than expected and took requests from the fans to close out a very memorable day of Blues at the Beach.