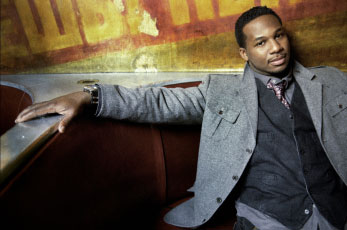 The Dally Record - You talk to a lot of guitarists – particularly blues-oriented guitarists – and their heroes are the usual suspects: Jimi Hendrix, Buddy Guy, Eric Clapton.

Robert Randolph’s musical heroes are less well-known: Calvin Cooke, the Campbell Brothers, Willie Eason. All are masters of the pedal steel guitar as used in the church Randolph attended as he was growing up in Irvington in the 1980s and 1990s.

“That’s the tradition I come from,” says Randolph. “When you grew up in our church, that’s who you listened to.” The style – called “sacred steel” – was developed in the 1930s in African-American churches that were unable to afford an organ.

“We knew about black R&B singers like James Brown,” says Randolph, who belonged to the House of God congregation. “We knew who Hendrix was, who the Allman Brothers were. But we didn’t sit around listening to them.”

But Randolph’s own skill on the pedal steel has made him a major figure in sacred and secular music. He has played with the likes of Carlos Santana, Los Lobos, Elton John, and Fountains of Wayne, as well as Clapton and Guy.

Backed by his group the Family Band, Randolph has gained a reputation for his funk-soul sound and his dynamic stage shows. Rolling Stone included Randolph on its list of 100 greatest guitarists.
Robert Randolph and the Family Band recently released their latest CD, “Lickety Split.” Their current tour will took them to the Mayo Performing Arts Center on Thursday, Aug. 8.

Randolph traces his interest beyond sacred steel to the blues guitarist Stevie Ray Vaughan, who died in 1990. A friend from church gave him a tape of Vaughan’s music in 1997, and Randolph felt an immediate connection.

“He was the first one to really open my eyes,” Randolph says. “From then on, I’ve tried to copy his soulful guitar licks. It’s a stretch doing it on a pedal steel.”

By the time he was 20, Randolph had enough of a reputation that he was approached by the jazz organist John Medeski to be part of a jam project called “The Word.” That 2001 album and subsequent live performances brought Randolph’s name to a wider audience.
Over the course of the past decade, Randolph feels that his music has become r
icher. “I think we’ve grown,” he says. “We’re better players. We’re better writers. We’re better musicians.”
Randolph feels that is apparent on “Lickety Split,” which has guest artists such as Santana and Guy. He says that collaborating with Santana “is something to be reckoned with. We’d be in the studio, and we’d come with songs that were 90 percent finished, one right after the other.”

Though pedal steel typically requires the player to be seated, Randolph would not always sit still during his own concerts. He would jump up, wave his arms, kick back his chair, and sometimes dance around the stage while the Family Band jammed behind him.

“I’d jump off the stage sometimes, but I’m not that young anymore,” Randolph says with a laugh. “We still get a little ragged on stage, but I don’t do it as much as I used to.” (He will turn 33 in December.)
However, he notes that his live show still features extended instrumental jams that allow all the members of the Family Band to have time in the spotlight. “It’s still the same mixture with a rootsy, gospel, bluesy sound,” he says.

Randolph says he is particularly pleased to return to his home state. “There’s something special about New Jersey,” he says. “You’ve got every culture there. That’s the great thing. You interact with different people, and it gives you an open mind.”

As a way of giving back to the Garden State, Randolph is working to start at least two charter schools that will emphasize music education.

“The kids today need something like that,” Randolph says. “We were the same inner-city knuckleheads, but we had music and art in the schools. The kids today don’t have that.”