San Diego's climate is sunny with Blues on the horizon Sept 7, 2013 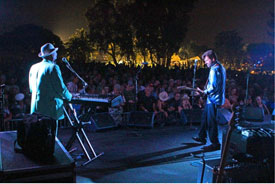 Picture this: A crisp blue sky hovering over a grassy park with San Diego bay on one side, a marina and downtown skyline on the other and some great blues music all around. The AimLoan.com San Diego Blues Festival will include all that, as well as three members of the Blues Hall of Fame, a shining new blues star and a Grammy winner.

General admission tickets are priced at just $10 through July 31 with VIP tickets available for $100. And, all festival proceeds benefit the Jacobs & Cushman San Diego Food Bank’s efforts to fight hunger.

How can you go wrong? www.sdbluesfest.com

Nikki Hill is ready for her closeup