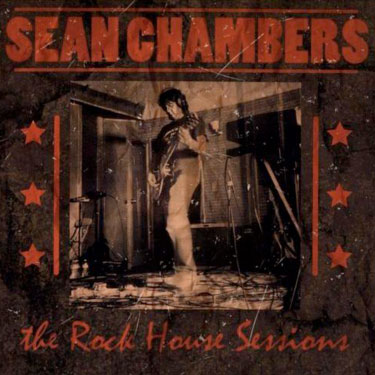 When Tampa Bay Area-based guitarist Sean Chambers began planning for his next album release, he decided to do things differently than he had on previous albums and looked northward to Nashville with its amazing studios, musicians and songwriting talent. The result will be released on October 15 when Sean’s new album, The Rock House Sessions, comes out on Blue Heat Records.

The Rock House Sessions features a number of firsts: it’s the first album he’s recorded as Sean Chambers rather than the Sean Chambers Band; producing for the first time is legendary keyboard player Reese Wynans (best-known for his long tenure as a member of Stevie Ray Vaughan’s band); and it’s his first recording exclusively using studio musicians, as Sean and Reese drew from the deep talent-laden pool of Nashville musicians and songwriters. The album was recorded at the studio of another acclaimed keyboardist – Kevin McKendree (Delbert McClinton Band) – named The Rock House, hence The Rock House Sessions.

“This project was a lot of fun for me, and working with all the spectacular musicians involved was a great experience for me,” Sean says about the sessions. “We recorded at The Rock House studios in Franklin, just outside of Nashville. I was originally only talking with Reese about playing on the new album, but as the discussion began to expand and we started discussing different song ideas, song arrangements and as I got more of his input and ideas regarding this project, I quickly realized that I had the producer I was looking for. I ran the idea of producing the album by Reese, he gave it some thought and a couple days later we talked and he agreed to produce the album.”

“I had a blast making the Sean Chambers Rock House album,” added Reese Wynans. “It was a chance for Sean to try a little something different, and a chance for me to try my hand at producing. I think it worked out really well.”

The core band on the album aside from Sean on lead vocals and lead guitar includes Reese Wynans on keyboards, Tommy MacDonald on bass and Tom Hambridge on drums. Special guests include  Rob McNelley on guitar, TJ Klay on harmonica, Chaz Trippy on percussion, Etta Britt on backing vocals, Bob Britt on guitar, Steve Herman on trumpet, and Jim Hoke on sax.

“As Reese and I spoke about the project further, we started entertaining the idea of using some heavy hitters to play on the CD with us,” Chambers says. “Before you knew it, we had an all-star lineup of musicians ready and available to record the album with us. Tom Hambridge, who produced a Grammy-winning album for Buddy Guy, played drums on the CD and also brought some really great songs to the table.”

Besides three new original Sean Chambers compositions and the Tom Hambridge contributions, The Rock House Sessions includes “Choo Choo Mama,” written by Alvin Lee; “Holding On” written by Gary Moore; and “Come To Poppa,” written by Willie Mitchell and Earl Randle but made famous by Bob Seger. Other tracks include new songs by Gary Nicholson, Kenny Greenberg and Rick Vito.

“I decided I wanted to record an Alvin Lee song on this album,” Sean says, “especially with Alvin having recently passed away, and him being one of my favorites going back to when I was a kid. I thought it would be a good way to pay my respects to him, kind of a tip of the hat by recording one of his numbers.

“Reese and I also chose to record Gary Moore’s ‘Holding On’ because we both really liked the track, and again, Gary was one of my favorite guitar players and I wanted to include a song by him if I could.”

Sean Chambers will support the release of The Rock House Sessions with his most extensive cross-country touring yet. Plans call for dates beginning in early fall through the end of the year, with a specific tour itinerary forthcoming.

“I think that people will really enjoy this album; it has a little bit of everything on it,” Sean offers. “My good friend (and Blue Heat label owner) Jeff Fischer and I have done some good work together on the last two CDs, but I believe this one is our best!”