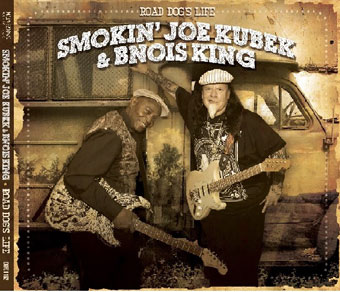 Since first pairing up back in 1989 for a weekly Monday night gig at a neighborhood pub in Dallas, Texas, Smokin' Joe Kubek and Bnois King have become an inseparable musical force. Indeed, the scientific notion that opposites attract has found no better basis in fact than the shining examples of King's understated, jazz-inflected guitar, in stark contrast to Kubek's incendiary, fret-burnin' sorcery. For over twenty-years this fearsome twosome has been sweeping through towns and plundering festival and nightclub stages across the globe with the notorious ferocity of a deadly Texas twister. In as much time this enduring partnership has also produced thirteen critically-acclaimed recordings before embarking on their latest chapter with the Los Angeles-based blues label, Delta Groove Music.

In 2012, Kubek and King signed on with Delta Groove to record what was to become the pair's fourteenth album. Close to the Bone marked a bold shift in direction for these two as they proceeded to forgo the comfort and luxury of electricity and literally unplug their instruments for the duration of the recording session. The results were astonishing and a welcome change of pace, allowing listeners a deeper glimpse into the inner workings of their musical bond and chemistry. Of course they didn't have to go it totally alone, as they were assisted with a little help from some new and old friends including fellow label mates Big Pete, Lynwood Slim, Bob Corritore, Randy Chortkoff, Shawn Pittman, Kirk Fletcher, Fred Kaplan, Willie J. Campbell and Jimi Bott, as well as former Red Devils' guitarist, Paul Size. The album was greeted with reverential praise and even placed #14 on Guitar World's Top 15 Blues and Roots Rock Albums of 2012!

For Smokin' Joe Kubek and Bnois King the journey to Road Dog's Life has certainly been a long road to travel, but in the words of these hardened road dogs, "we wouldn't have it any other way."

"King's vocals are like aged whiskey, smooth and mellow, with a warm glow that spreads throughout your body when you partake." – Blues Revue Magazine

"Kubek and King bring a full course meal to the dinner table. With this dynamic duo from Dallas you get great songwriting, two distinctive approaches to the guitar and a singer in Bnois King with a voice and vocal style that delivers the message like very few in the modern blues world." – Blues Junction