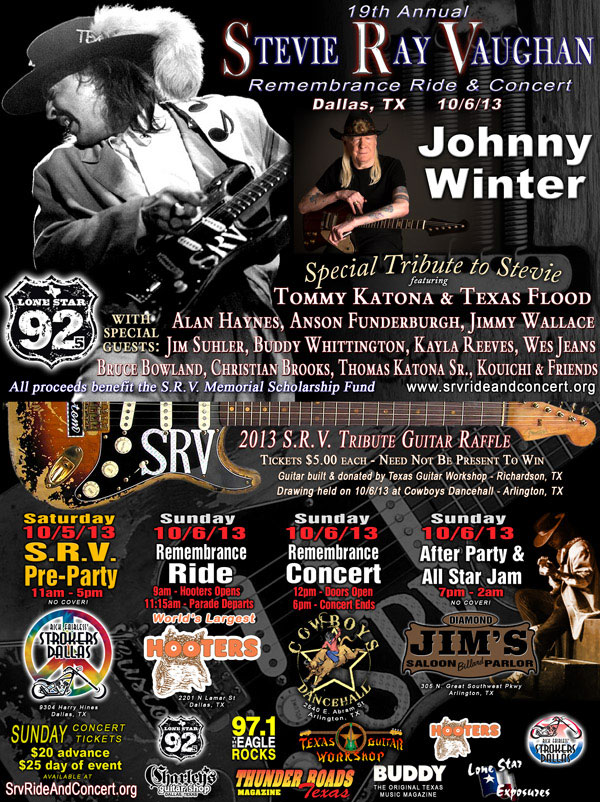 Presented by LoneStar 92.5 and Hooters, the 19th Annual Stevie Ray Vaughan Remembrance Ride & Concert will be held on October 6, 2013 in Dallas, TX. This event, consisting of a motorcycle parade and a blues concert, is a family friendly celebration which is all about remembering the life of Stevie Ray Vaughan. National headlining bands join Texas talent to provide an event every year where both music fans and motorcycle enthusiasts can gather to remember a Texas Legend.

In 1991, Ann Richards, who was at that time the governor of Texas, signed an official proclamation naming Stevie's birthday, October 3, an official holiday in the State of Texas - "Stevie Ray Vaughan Day". In 1993, with his mother Martha's blessing, the annual Stevie Ray Vaughan Remembrance Ride & Concert was put together in order to honor the life and music of Stevie. Taking into consideration the date of Stevie's birthday, the first Sunday in October was chosen for this celebration of his life.

All of the proceeds from this yearly event go to the Stevie Ray Vaughan Memorial Scholarship Fund, established by Martha Vaughan, which provides assistance to students who demonstrate a strong interest and ability in music to pursue a college education. Stevie's mother has been an active participant in the Scholarship Fund, and has attended the annual scholarship auditions at Greiner Middle School to help select the award recipients. Located in the heart of Oak Cliff where Stevie spent his childhood, Greiner Middle School, a DISD magnet school for music, was selected as the target school for the awards. Each year Mrs. Vaughan has matched the donation to the Scholarship Fund from this event. To date, 188 S.R.V. Scholarships have been awarded to music students at Greiner Middle School.

For those eager to get the party started, there will be an official 2013 Pre-Party on Oct. 5th from 11 a.m. to 5 p.m., at Stroker's. There is no cover charge. Then the real party begins Oct 6th, when the World's Largest Hooter's opens for breakfast at 9 a.m. The parade will depart promptly at 11:15 a.m., heading out from Hooters in Dallas' West End, then proceeding to Cowboys Dancehall in Arlington for the memorial concert. There is a $10 fee to ride a motorcycle in the parade, but this fee can be deducted from the price of a ticket to the concert starring Johnny Winter that afternoon at Cowboys in Arlington. This concert will start at noon, followed by a three hour special tribute to Stevie with Tommy Katona & Texas Flood and numerous special guests including Alan Hayes, Jimmy Wallace, Anson Funderburgh, Jim Suhler, Christian Brooks, and more. You can see a list of all musicians playing here. There will be venders at Cowboys offering a variety of food, clothing, artwork, and other merchandise. At 4:15 p.m. a winner will be drawn in the 2013 S.R.V. # 1 Replica Guitar Package Raffle. Tickets for this raffle can be purchased for $5, and you do not be present to win.

Tickets for the event are $20 if purchased in advance, or $25 the day of event. All tickets are General Admission, but limited reserved tables for four are available for $100. The table price does not include admission. Both I - 30 and Hwy 360 will be completely shut down by the Dallas Police, so make your travel plans accordingly.

For the die-hard partiers, there will be an After-Party / All Star Jam at Diamond Jim's Saloon in Arlington from 7 p.m. until 2 a.m. (This is conveniently located only one mile from Cowboys, at 305 Great SW Parkway.) There is no cover charge for this continuation of the party, which will be hosted by the Christian Brooks Band.

Come out and join fellow music lovers in this celebration honoring the memory of a Texas Legend, Stevie Ray Vaughan. With all of the talented performers scheduled, and the cooler weather, this should be a great experience.