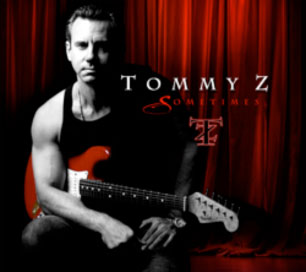 Contemporary electric blues guitarists swagger as the aggressive nature of the genre and the searing sounds squeezed from the instrument go hand in hand. Included is the unspoken challenge of measuring up to one’s peers, let alone the legends from T-Bone Walker on. Be reassured, Tommy Z from the wilds of Western New York passes every test of his mettle with cool determination forged in part by his unselfish service to his country. The son of a Viet Nam vet, he has been performing concert tours overseas to US troops since 2003, including in some of the most war-torn locales on earth, and his second album, entitled Sometimes, shows his deep soul and unquenchable burning passion.

Seven originals and three choice covers on Sometimes, span a range of styles and moods in the muscular company of Frank Reino, Jerry Livingston and Walter Riggo (bass), Damone Jackson (drums), JJ Moscato (keyboards) and Sam Guarino, Barry Arbogast and Gil DeBrasse (horns). Dripping menace and a touch of the voodoo child, Tommy makes his fret-busting presence known on the unrelenting wah wah-driven instrumental “Roger That,” the military jargon for “got it” implying a ton of clever meanings. His funky take on the Howlin’ Wolf classic “300 Pounds of Joy” is slimmed down to “200” pounds with no loss of heavyweight blues power. His understated vocal expressing the same inviting come-on of the original while his lusty, soaring, extended guitar solo speaks burning desire. Johnny “Guitar” Watson’s “mannish” classic “Gangster of Love” could have been written for Tommy. The boasting lyrics trip easily off his tongue, culminating in “A million dollar reward for me, each and every state, the sheriff said, ‘Are you Tommy Z?’ in a very deep voice, I said, ‘Yes sir, brother sheriff, and that’s your wife on the back of my horse!’” as the band pounds the stop-time riff with unbound exuberance.

Real men are tender as well as tough and Tommy shows touching vulnerability on a heart-tugging version of Eric Clapton’s “Old Love.” Underscored by the sympathetic accompaniment of Moscato on acoustic piano, his dynamic, lyrical guitar solo bursts with regret and unrequited longing. The instrumental “Snooty Funk” bumps booty with a bass string “ear worm” and the “stinkiest” groove imaginable. Tommy uncorks his button-popping vocal chops on “Livin’ in a Blue State,” the title referring to New York state. While dynamically contrasting a taut Texas boogie rhythm against a dramatic descending chord progression, he makes a political statement rare in contemporary blues. However, the emotional centerpiece of the album is “So Tired of Being Lonely,” a mesmerizing, West Side of Chicago minor-key slow blues displaying the full range of Tommy’s talents.  After declaring “I once had true love, it weren’t always this way…but some devil and his money came and stole my love away,” he fights back with a defiant, blistering, mandolin-style strummed opening to his solo before transitioning into bent string wails of anguish.

On “I Got Your Back,” Tommy's thunderous blues-rock riffs seamlessly mix with lead and rhythm while he reassures his woman “I got your back till the end, baby, on that you can depend,” and makes his axe squeal in ecstasy with the cry of love. Commanding his guitar to clang like a veritable fire alarm during the intro to the title track, Tommy launches into a classic 8-bar, busted love affair R&B ballad, which Bruce Iglauer says "any electric blues fan should like." After a series of escalating, ironic lyrics such as “I got more money, baby, than ever before, and I have you to thank for showing me the door. I do most everything for myself, and the one thing I don’t, I have got somebody else… It’s hard to see, before that change begins, sometimes when you lose, you really win,” he delivers the knockout punch with a stunning, melodic, mandolinesque solo.  Closing his set with the rampaging instrumental “Tommy’z Boogie,” he throws down the gauntlet with a virtuosic explosion that will have other guitarists running for cover.

Tommy Z combines extraordinary instrumental and vocal excellence with unwavering commitment to the unparalleled expressiveness of the blues. The result is a cathartic musical experience celebrating the joys and sorrows of life with unforgettable aural images.