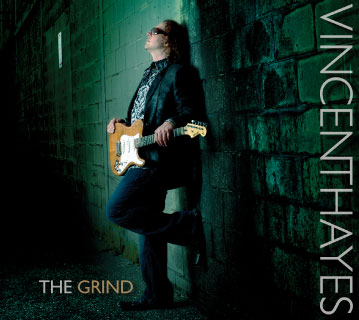 Vincent Hayes has been making waves in the roots and blues worlds ever since his 2010 debut release titled Reclamation earned him an him a 2011 Blues Music Award Nomination for Best New Artist. Though the “Vincent Hayes Project” moniker was shortened, Vincent comes out of the box swinging hard on his follow up disc, The Grind, released in August 2013 on North 61 Records. The Grind was produced and engineered by Bill Chrysler, and current sound engineer for John Mayer. Mastering was performed by Brian Lucey at Magic Garden Mastering (Black Keys, “Brothers/El Camino”).

The Grind features 10 brand new songs, including nine originals, and a smoky interpretation of the classic Marvin Gaye song “Inner City Blues.” This is Hayes's favorite song of all time, and as Hayes states, “it is still very bit as relevant today as it was then.” The once five piece band has also been stripped down to a power trio, where Hayes's guitar work takes over on songs like “All You've Got,” along with some prophetic lyrics and rocking Strat work on songs like “Common Vision” and “Things That Get Me By.”

Although Hayes seems to be more of the genre of crossover blues/roots rock artists in the vein of Gary Clark Jr, Devon Allman or Derek Trucks, blues purists will be equally as pleased with the lyrically fun swing of “My Guitar And My Baby” and “Other Side of Town,” where Hayes proves that his fretwork and emotional delivery of slow minor blues is unmatched in today's crop of new blues guitarists. Additionally, his reputation as a world class showman have recently earned him invitations to open for B.B. King at the prestigious Frederik Meijer Gardens and as a co-headliner on a triple bill with Buddy Guy and Jonny Lang at the 2013 Coast West Music Festival in Michigan.

“Vincent Hayes has a lot to say about the state of the world, which gives the genre-spanning material on his new studio album rare power and a gritty honesty. The Grind represents the evolution of his musical approach, finding favor not just as a blues guitarist, but as a roots rock singer-songwriter with a great band and well-crafted songs. Hayes plays from the heart, wherever that might take him. While there are blues hues to satiate longtime fans, Hayes' writing and sincere delivery straddle rock, funk, blues and more with a rootsy sort of charm that grows audiences.”
- John Sinkevics, Revue Magazine/Holland Sentinel

“With The Grind Vincent Hayes proves his BMA nomination for "Reclamation" was no fluke. Vincent's songwriting takes a big step forward as he bares his soul with his lyrics. His guitar work shines throughout The Grind showing real growth.”  - Vinny Bond Marini, Music On The Couch