Jon Zeeman :: DOWN ON MY LUCK 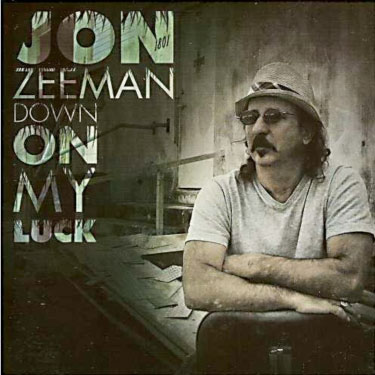 From the age of 8, Jon Zeeman has been obsessed with guitars, ampliﬁers, wah-wah pedals, power tubes, Johnny Winter, B.B King, Jimi Hendrix, and Eric Clapton, Growing up outside NYC, he studied classical piano and decided on a career in music at the ripe age of 13. Early jobs at IHop and other occupations taught him that the business world, or anything that required waking up early was not for him, and so he spent his high school years practicing more and more and doing less and less homework. After studying music at Ithaca College for 2 years, Jon left school to play on the road. In the mid 80's Jon moved to New York City and became involved in producing, session work and song writing, working at his "Studio Z" in a downtown loft. The New York years were punctuated by many trips to Scandinavia, where he toured and recorded with several groups.
Jon began performing his own music in the mid 90's working regularly at the "55" Club and other downtown venues. Leaving NYC at the birth of his daughter, Zoe, Jon now resides in Martha's Vineyard and West Palm Beach Florida, where he performs regularly. He has toured, recorded and performed with such notables as Susan Tedeschi, Janis Ian, and the Allman Brothers Band.
2013 brings a new direction for Jon Zeeman with his vocal debut release of, Down On My Luck, which includes ten new original tracks and one cover, Johnny Winter’s, “I Love Everybody.”
More info: www.jonzeeman.com