You can’t play the blues, you have to be the blues 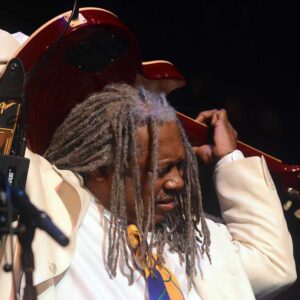 Aayah Nain of The Good, The Bad and The Blues 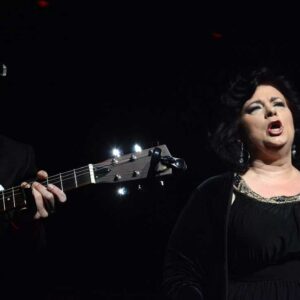 Ben Rice and Lucy Hammond in the finals 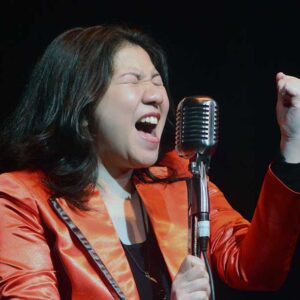 Christine Mercado of the Brat Pack of the Blues Asia Network 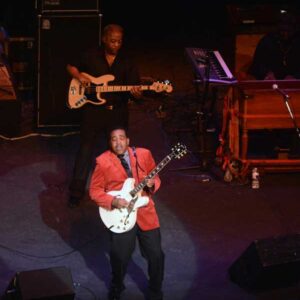 Eddie Cotton in the Orpheum spotlight during the IBC finals 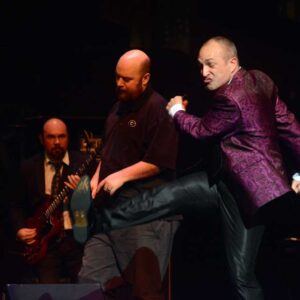 Nico Toussaint, of Nico Toussaint and his Mighty Quartet, improvises as a sound tech tends to a dead mic during the IBC finals 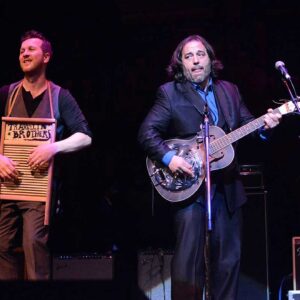 “Hi, I’m Little Steve-O and I am here with Bongo Joe. We’re checking in.”

The introduction would sound strange at most registration tables, but not this past week in Memphis, Tennessee. Around here, Coyote Bill, Blue Jay Slim and Honey B aren’t critters. They are people. Blues people.

More than 250 contestants in band and solo/duo categories represented blues societies from all across the globe at the Blues Foundation’s 31st International Blues Challenge. Each had aspirations of making it to the finals in which the top eight in each category performed in the cavernous and regal Orpheum Theatre up the hill on Beale Street.

“You can’t play the blues, you have to be the blues,” said Aayah Nain, the bandleader of The Good, The Bad and the Blues, explaining on Saturday why his group was able to reach the storied venue for the IBC Finals. “It’s more than licks and tricks. It’s emotion. It took me a long time to get to that place. I learned to slow down and let people enjoy it.”

Indeed, the blues is an emotion, a mind-set and lifestyle as much as it is a musical genre. The most common songwriting formula is two verses and a well-delivered punch line. Hurricane Ruth even uses the technique when she talks. “People always ask, ‘Was I angry when I wrote that song? Did you have some bad relationships? I think so.”

More than a dozen Beale Street clubs were filled with talent during the two nights of quarterfinals and one for the semis. There was pressure and drama. If there were technical issues, musicians had to work through it and trust the judges. Networking, however, is as important at the IBC as advancement in the competition.

“Everybody in the business is here,” said Calgary’s Tim Williams, who competed in the solo/duo category even though he won the whole thing in 2014. “If you come here with a business mind-set, not for the beer, barbecue and women — not that there’s anything wrong with that –there is great opportunity.”

Erik “Fingers” Ray, the Boston solo/duo entrant, sang the blues about being paired in the same venue as the silver-throated Williams two years in a row. Regardless, the charismatic Ray had a superb performance and wonderful crowd reaction in the Pig on Beale. “We did well but the next three were better than both of us,” Ray laughed afterward. “It’s a tough room.”

“It’s like being in the Olympics,” said Joric Maglanque, whose stage name is Delta Slim, and not the Delta blues fans here know best. Maglanque was one of the four entrants from the Philippines. “In the Philippines there is a very passionate blues community,” he said. “It’s a dream come true [to be here]. This is the world stage for blues.

For blues society fans, the only pressure is deciding who to go see and then trying to find a place in which to sit. “We are all here for the love of music, said Katie Willison of the Topeka Blues Society, who attended the IBC for the seventh time. “After a while it becomes more of a reunion than a challenge.”

The happiest supporters were from the Dayton Blues Society, which had finalists in both categories: Brian Keith Wallen in the solo/duo and Noah Wotherspoon, band.

After a set with a crescendo as high as the Orpheum’s fifth tier, Wotherspoon caught his breath outside and explained why his town digs blues.

“If you take a map and draw a straight line from Clarksdale to Detroit, it goes through Dayton,” he said. “We’re trying to carry the tradition on the best we can.”

It was the second time in the finals for both Wotherspoon, voted best guitarist, and Wallen, who finished runner-up.

“The judges’ comments were really helpful,” Wallen said. “This year I tried to pick traditional songs but different enough to capture everyone’s attention.” Wallen said his approach to playing before more than 2,000 in the Orpheum was the same as it is for 50 in a restaurant. “You just have to come out with a whole lot of energy and, it sounds corny but, put a whole lot of heart into it,” he said.

Lucy Hammond, a solo/duo finalist with Ben Rice, had a similar, if not more confident, attitude.

“I killed it, didn’t I, baby?” she said, relaxing in a couch in the Orpheum lobby. “When you do this since you are a little kid, it’s not scary. Ben’s first festival was when he was in fifth grade. I’ve been preparing for this my whole life.”

Other artists were more subdued. Terrie Odabi of the Golden Gate Blues Society, who reached the semifinals, was asked if the trip was worth it. “I’ll know by spring,” she said. “Some of the contacts really take time to take off.”

Randy McQuay said he spent $5,000 for his two times to the IBC. He said his goal was to reach Friday’s semis. But on Saturday, he performed in the great room. “Everybody wants to see the theater from the stage point of view,” he said.

When McQuay was awarded first place, he made a speech, kissed the stage, then walked out from the view of the audience and broke down in tears.

It was all smiles for first-year entrant Eddie Cotton, which won the band category for the Vicksburg Blues Society for the third time since 2010.

Cotton, the band leader, relied on his blues instincts to prevail in the ornate venue. “I am used to making eye contact,” he said. “Even though I couldn’t see them, I could feel them.”