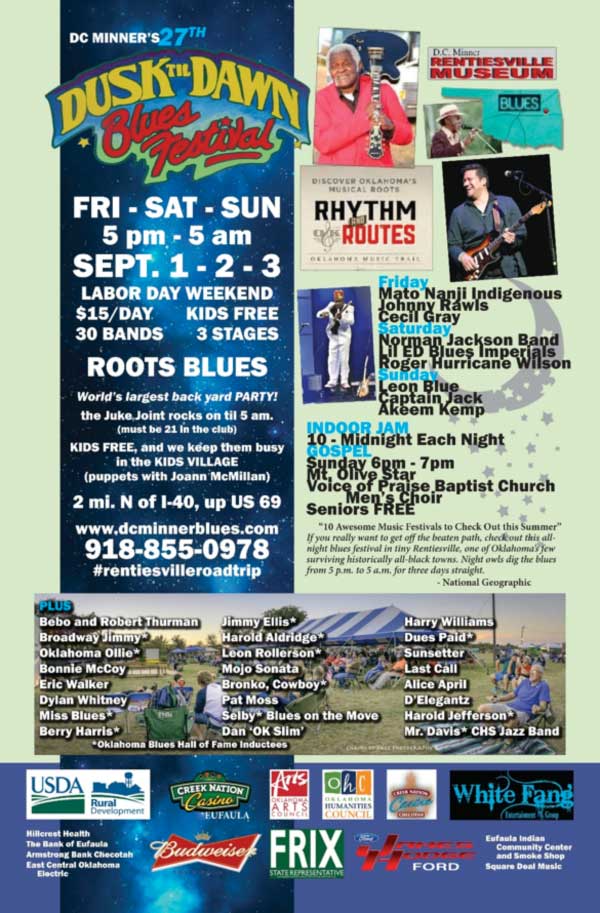 “If you really want to get off the beaten path, check out this all-night blues festival in tiny Rentiesville, one of Oklahoma’s few surviving historically all-black towns. Night owls dig the blues from 5 p.m. to 5 a.m. for three days straight,” says National Geographic.

The Dusk Til Dawn Blues Festival in Oklahoma with be held Labor Day weekend, September 1 – 3, 2017 in Rentiesville.

Three stages, indoors and out, 35 bands, over 200 musicians, workshops, kid’s village, and bar-b-que. The signature event of the D.C. Minner Rentiesville Museum, Oklahoma Blues Hall of Fame (OBHOF), that we fondly refer to as the “world’s largest back yard party.”

Headliners include: Indigenous – Mato is back in Rentiesville after some 20 years… he has grown into one of the most respected singer guitarists on the road, touring regularly with Buddy Guy and the Jimi Hendrix Experience.

Lil Ed and the Blues Imperials – Blues Music Award Band of the Year from Memphis Blues Foundation features the same players for 20 years. A powerhouse of fun!

Norman Jackson Band– placed third in the IBC Challenge, over close to 200 bands!

Akeem Kemp from Arkansas – placed in the IBC Youth Challenge in Memphis.

Selby Minner and Blues on the Move – Oklahoma Slim.

Captain Jack up from the Dallas area DUES PAID Bartlesville and OBHOF.

Leon Rollerson a legend from Tulsa and an OBHOF.

Jimmy Preacher Ellis – up from Dallas, everyone loves Preacher and OBHOF.

Berry Harris – from Stringtown OK and Wichita… a life in the blues OBHOF.

Created by D.C. Minner himself with, and now presented by Selby Minner and the Friends of Rentiesville Blues Inc., the old cotton field out back will ring with the blues!! D.C. (1935-2008, in 7 Halls of Fame) knew they were bulldozing old juke joints every day and has kept his family legacy alive here in Rentiesville, where he was born and raised, for people to enjoy from now on. . . . Kids are free, we keep them busy. The High School Jazz Band will come in courtesy of Jim Davis. And there is a Gospel Show to start the Festivities on Sunday. The outdoor part is the most family friendly Blues festival you will find. But adults only in the juke joint, please. All the headliners from the main outdoor stage come inside after midnight and perform their second sets.

Years of people having fun: “Hey everybody! Tell everybody!…” that in Oklahoma, hidden out in the woods, is a little old juke joint called the Down Home Blues Club. It’s authentic, funky, and very much alive.

It’s been there since Oklahoma Bluesman D.C. Minner’s grandmother Lura opened up the Cozy Corner, a bootleg corn whiskey bar in 1936. Now, however, the bootleg whiskey is gone. You can get a cold beer or a soda, and sometimes people bring potluck, but it’s all about the music. The club hosts a free jam session party every Sunday, musicians show up to play, and the years roll back. Part of the magic is in the music played there, but the room itself has a grittiness and authenticity both palpable and intoxicating. It is rural and real in a sense that other venues fail to capture. D.C. built it with his own hands… you can feel it. For those who long to feel the power of the Blues, try Rentiesville!” D Lovera