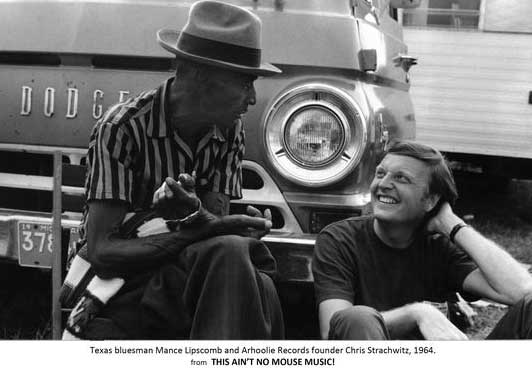 Since 1960, Bay Area-based Chris Strachwitz has perhaps done more than anyone else to popularize American musical genres including country blues, zydeco, Cajun and Tex-Mex musics including Conjunto. His story is told in the new DVD “This Ain’t No Mouse Music: The Story of Chris Strachwitz and Arhoolie Records” (Kino Lorber) as well as a similarly titled 2-CD soundtrack (Arhoolie).

The title of this engaging 90-minute documentary alludes to Strachwitz’s dislike of manufactured pop and continuing deep passion for music rooted in local communities.

Strachwitz was born in 1931 to an aristocratic family in Lower Silesia, an area of Germany that became Poland at the end of World War II. The arrival of Soviet troops forced the departure of his family, and they eventually settled in California.

There Strachwitz fell in love first with the sounds of jazz, and later with R&B and blues. The documentary starts with Strachwitz reminiscing about hearing Lightnin’ Hopkins on the radio, and how, after discovering Hopkins was alive and well in Houston, he set off to record him.

Lack of funds initially delayed this goal, but on the same trip Strachwitz recorded Texan Mance Lipscomb, who in 1960 became the debut artist on Arhoolie, a term used to describe field hollers. Vintage footage captures both Hopkins and Lipscomb in performance.

Strachwitz became a leading figure in the “blues revival,” and was soon issuing albums by other older blues artists, including Mississippians Big Joe Williams, Bukka White, and Sonny Boy Williamson II, whom Strachwitz recorded live during one of his final King Biscuit Time radio shows.

Although Alan Lomax first discovered Mississippi Fred McDowell, Strachwitz released his first full LP and took him to Europe, significantly broadening his audience. Multiple Arhoolie albums by Lightnin’ Hopkins would likewise make him a star on the folk circuit.

The DVD captures Strachwitz as he travels back to some of the places where he recorded music, notably New Orleans. He helped jump-start the career of Hopkins’ cousin, zydeco great Clifton Chenier, and his documentation of Cajun artists, including various members of the Savoy family, played a major role in reviving French speaking culture.

Strachwitz’s role in reshaping popular music is attested to by commentators including Ry Cooder, Taj Mahal and Bonnie Raitt. He also retells the story of how getting half of the publishing on Country Joe and the Fish’s countercultural classic “Fixin’ to Die Rag” helped fund his project of documenting more traditional music.

DVD extras include extended clips of C.J. Chenier and a second line parade in Treme, and vintage footage of Bukka White playing piano. Also included is an extended interview with blues scholar Paul Oliver and Strachwitz, who discuss their 1960 visit with Clarksdale barber and bluesman Wade Walton.

The 2-CD, 38-song soundtrack demonstrates the range of Strachwitz’s musical interests, with selections from artists mentioned above as well as Big Mama Thornton, trad jazz legend George Lewis, and Flaco Jimenez. The large booklet also features multiple historic photos and commentary on each song by Strachwitz.