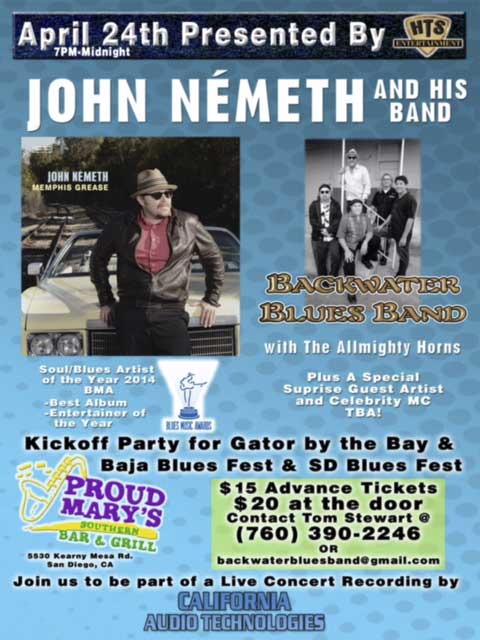 Nemeth, is the winner of the 2014 “Soul-Blues Artist of The Year” Blues Music Award (BMA) plus a multiple BMA nominee in several categories including “Entertainer of the Year.” An extraordinarily talented singer, harmonica player and songwriter, he’s got an infectious, charismatic stage presence and is very down-to-earth.

The April 24 concert will also feature Nathan James and his band. James is the popular blues/roots artist who, along with then partner Ben Hernandez, won the Solo/Duo title at 2007 IBC in Memphis representing San Diego. James has gone on to invent and build his own instruments including his “Washtar.”

Also appearing will be a regional favorites, The Backwater Blues Band featuring The Almighty Horns and a surprise, national guest artist who will be celebrating their birthday that evening as well. Guest Hosts will include Peter Oliver of Gator By The Bay, Michael Kinsman of the San Diego Blues Fest and Tom Stewart, drummer for Backwater Blues and the April 24th event presenter.