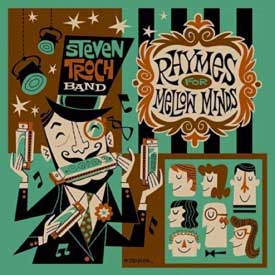 Belgian Hohner endorser Steven Troch is a Jack-of-all-trades and a master of some, sings like he means it, blows a badass harmonica and writes his own songs. His album, Rhymes for Mellow Minds, is an eclectic collection of original compositions by this harp maestro and his band. This winner of two international harmonica contests draws inspiration from bluesmasters and players like Gary Primich and William Clarke. Rhymes for Mellow Minds covers a remarkable range of musical styles, from swingin’ jazz to moody rumbas, dance-floor-worthy shuffles to rollickin’ country blues stomps, hard-rockin’ shuffles to gospel infused chants.

Featured with Troch, who is known as the “Belgian Blow Torch, is “Little Steve” Van Der Nat, a killer guitar player who nails it on every track; Miss Liesbeth Sprangers who keeps a steady pace on her powerhouse bass; and no-nonsense drummer King Berik, who beats his drums like a madman.

The songs lead you along a poorly-lit blues path, past lost souls, nameless faces and even past a galaxy, very, very far away. They’re inhabited by fictional characters like the drunken low-life staring at neon-lit hookers, the old hermit who lives on top of the hill, and the pretty girl whose boyfriend looks like Woody Allen. Rhymes for Mellow Minds is an innovative album revealing that there’s more than one side to the Steven Troch Band.