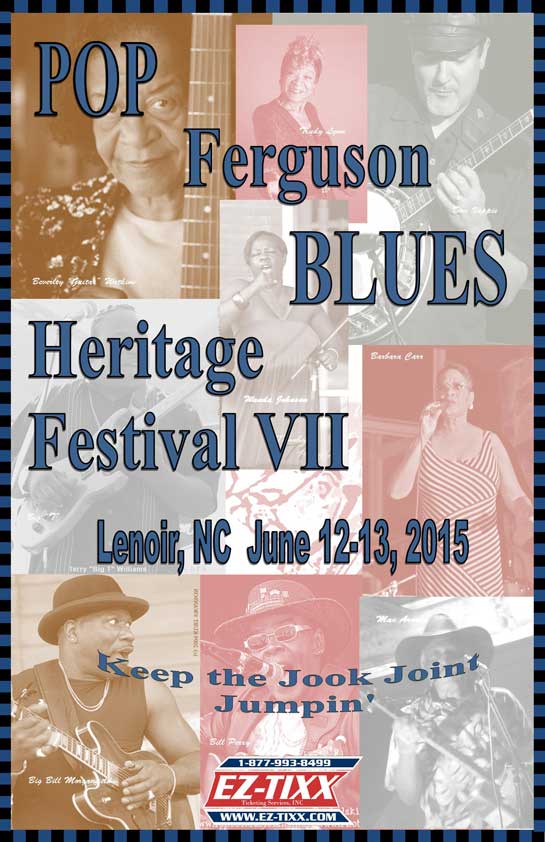 LENOIR, NC – In the foothills of the Blue Ridge Mountains, plans for The Pop Ferguson Blues Heritage Festival, which has taken place in historic Lenoir, North Carolina on the second weekend of June since 2009, is creating a lot of buzz among blues fans with the Festival VII line-up. For the past six years Pop Ferguson Blues brought to the stage blues legends from around the country, all of whom give stellar performances for their fans. This year’s festival will honor yet another outstanding group of legends including: Big Bill Morganfield, son of Muddy Waters; Mac Arnold, co-founder of Soul Train; Pop Ferguson, a Lenoir native and lifetime Blues artist; Beverly “Guitar” Watkins, who once played back-up for Jimmy Hendrix who then gave her a guitar; a special Saturday Night Jook Joint performance by Don Vappie from New Orleans; international Blues vocalist Trudy Lynn; and from St Louis, Barbara Carr, once rated the top Blues Female Jook performer in America by The Blues Foundation and awarded in 2014 a Lifetime Achievement Award from The St Louis Blues Society.

For those who might be unfamiliar with the term Jook (or Juke), It is a word from the deep south for a pleasure house. It may have been a bawdy house or a remote shack where men and women danced, drank and/or gambled. Often, it was a combination of all three. Whatever the meaning, you can bet the house was jumpin’, the blues were pumpin’ and the folks were slow draggin’ their troubles away.

Pop Ferguson Blues Heritage Festival is a living documentary that makes every attempt to promote, preserve and advance the culture of Blues music as an art form in America. This year’s festival will give its audiences an experiential day with the sights sounds and smells of an authentic Jook Joint. The music will have folks singing and dancing all day long. Food vendors will be serving up popular foods that would have been served in Jooks, and some of Lenoir’s talented artists will be there with their artistic interpretations of the Jook era.